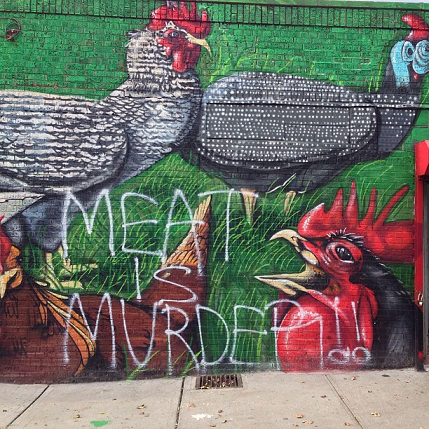 Australia is still framed as one of the world’s main meat-eating cultures (OECD qtd. in Ting), with a strong normative connection of meat-eating with national identity, as has been illustrated—supposedly in a tongue in cheek way, although this depends on perspective—in Australia Day campaigning by both Meat and Livestock Australia (see fig. 1), and the National Australia Day Council (see fig. 2). 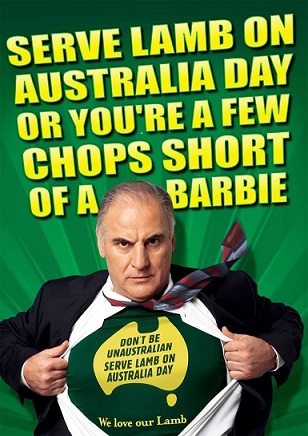 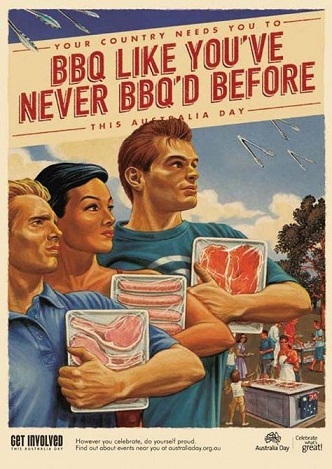 This interconnection of meat-eating and Australian national identity continues in recent Australian Day campaigning by the Meat and Livestock Australia, although campaigns are now released in video form in YouTube. One illustrative example is the 2016 Australia Day lamb campaign, Commence Operation Boomerang. Here the action focuses on bringing home Australians living overseas for Australia Day. In one scene of the YouTube video “commandos” smash their way into the home of a very Hipster looking young man (located in Brooklyn, New York City), who says “but, I am a vegan now.” The commando looks incredulous, blinks, as if these words uttered by an Australian are preposterous, and a flamethrower is then used to burn the young man’s kale meal and furniture. This scene is followed with Lee Lin Chin (the SBS newsreader) contemptuously uttering the word “vegans.”

And yet, alongside this very evident hierarchising of meat versus plant-based eating, Australia has also been recognised by Euromonitor International as the third fastest growing vegan market in the world, after the United Arab Emirates and China (Cormack), with this rise of veganism being described as “unstoppable” (Hancox). It is unsurprising that such visible differences and shifts in food norms and eating are socially contentious.

This issue of M/C Journal takes a snapshot of the rise of alternative eating norms, primarily with reference to the Australian context, as a predominantly meat-eating culture experiencing changes in eating norms. This issue thus aims to identify and explore a range of the issues, development, and traction of new food norms. These include those of being flexitarian (for example, having meat-free Mondays), reducetarian, pescatarian, kangatarian (a niche form of ethical eating in Australia), vegivores, semi-vegetarian, and vegetarian, through to commitments to veganism—along with consideration of commitments to other kinds of consumption practices.

More specifically, the contributions to this issue strive to explore the development and range of such alternative eating practices, some of the initiatives used in their promotion—as well as in their rejection by non-participants—and some of the reasons being mounted for individuals and society to make shifts to their eating patterns. Broadly, the contributions to the issue move from considerations of the norms of meat-eating, including investigations of the diversity of ethical issues caught up in existing and potential practices of meat-eating, through to considerations of the rise of alternative norms, and of some of the contentions surrounding these new norms. Contributions thus explore these diverse topics with considerations of ethical, legal, culturally normative, and personal assumptions and frameworks, as well as examining the way such assumptions and frameworks are established and circulated in our networked society. In total, while the articles together highlight a variety of everyday dietary practices and the various forms of reasoning utilised in their defense—from meat eating to plant-based—they also consider some of the factors troubling these practices.

In the feature article of the issue, “From ‘Meat Culture’ to ‘Cultured Meat’: Critically Evaluating the Contested Ontologies and Transformative Potential of Biofabricated Animal Material on Culture and Law”, Hope Johnson inspects the transformative potential of biofabricated animal material as a new food (meat) source, which she reasons may challenge both the production and consumption of meat as well as meat-eating norms in countries such as Australia. These new possibilities are, for instance, leading to debate over what is legally defined as meat. And yet, as she outlines, despite conjectures that biofabricated animal material might be productive for the environment, for human health, and for animals, the introduction of biofabricated meat may actually end up reinforcing the dominance, standard practices, and law of a meat-eating culture.

Rachel Ankeny, Michelle Phillipov, and Heather Bray explore the terrain of contested ethical meat norms by investigating the role of celebrity chefs, restaurants and lifestyle media in the promotion and circulation of new norms regarding ethical meat. As they argue, because high-profile chefs have the potential to shape eating practices, rather than promoting any single right mode of eating, they should promote dialogue about the various trade-offs inherent in meat consumption. In a related manner, Nancy Cushing reviews the arguments for kangatarianism and the objections to eating Australia’s most iconic animal. By doing so, she highlights the entanglements of contradictory ethical positions concerning animals, and their impacts on efforts to bring about new food norms and dietary practices. Also considering issues of changing norms regarding meat consumption, Tani Khara and Matthew Ruby offer a different perspective, however. They focus on contemporary urban Indians’ justifications of their shifts from predominantly plant-based eating to an increase in meat-eating. In particular, they examine the increase in availability of different meat-based foods in urban India, emerging interests in meat-based cuisines, and meat becoming understood as a status symbol.

Shifting the focus from this diversity of meat-eating practices, the next articles consider different dimensions of the rise of alternative norms, with a focus on the increasing traction—and contestation—of vegan ideals and veganism. Deborah Williams thus examines the UK and Australian dairy industries’ hashtag attempts in their #Februdairy campaign (aimed at promoting the benefits of dairy) to contest activist Veganuary campaign (designed to promote veganism), and her case study reveals that the social media efforts of farmers and dairy supporters are no match to counteract the well-organised and equally passionate vegan and animal activists. In their turn, Debbie Rodan and Jane Mummery demonstrate that despite evident shifts to new food norms and practices, vegan ideals are still being codified and deployed in Australia as aberrant and abnormal, with such adversarial framing apparent in mainstream and online news, and social media commentary. As they discuss, however, such adversarial framing itself promotes broader public discussion concerning animal welfare and ethical norms of eating and consumption.

Lelia Green in her autoethnography takes an introspective look at the highly contested nature of what it is to be vegan. Green examines a range of perceived imperatives, benefits and constraints associated with this dietary response to western consumer culture and finally touches on how a more inclusive vision of “being vegan” might help her to feel less “bad”. Continuing this focus on the experience of being vegan, we conclude this issue with Clare Mann’s survey and discussion of the emotional suffering experienced by vegans in their everyday living, based on work conducted in her private psychology practice between 2013 and 2018. In response to what she calls the “burden of knowing”, and wanting to validate this experience, she codifies the pain of vegan experience in a non-vegan world as “Vystopia”. She finally asks the question whether recognition of this experience could increase human empathy to animals and “propel the world towards a vegan norm”.

These articles are, necessarily, brief. As noted, they do not neatly align in their understanding of what is right in eating, despite all being driven by a common recognition of the need for change in our norms concerning food production and eating, particularly with regards to meat. They do all shed light on the diverse assumptions and perspectives that inform our practices and our justifications concerning meat-eating, or our rejection of it. They can all, we hope, play a part in bringing this important debate further out of the binarised divisiveness that is often reported upon, including in this issue, when animal activists—vegans and otherwise—trade barbs with proponents of animal agriculture. The question inspiring this issue is what new norms our eating should reflect, and what would make them both sustainable and ethical, and indeed normative. Answering this challenge needs more than historically binarised voices, and this is something that we think this issue provides. We hope, in particular—with an eye again to the ongoing campaigning concerning Australian eating—that it makes us all think twice about what we throw on our barbeques.

We extend our thanks to our contributors. We thank, too, all those who engaged in the blind peer review process. We sincerely appreciate the efforts of everyone who offered their expertise and their time as well as offering valuable comments on a wide range of contributions.

Dr Jane Mummery is a Senior Research Fellow at Federation University Australia. She is the author of The Post to Come: An Outline of Post-Metaphysical Ethics (Peter Lang, 2005), of Understanding Feminism (with Peta Bowden, Routledge, 2009), Radicalizing Democracy for the Twenty-first Century (Routledge, 2017), and Activism and Digital Culture in Australia (with Debbie Rodan, Rowman & Littlefield, 2017). Her research interests include the ethical and political dimensions of everyday life, and currently revolves around challenging neoliberal and anthropocentric assumptions to reorient value as it is played out in radical democracy, activist action, and human-animal-environmental relations.