The Challenges of Enthusiasm 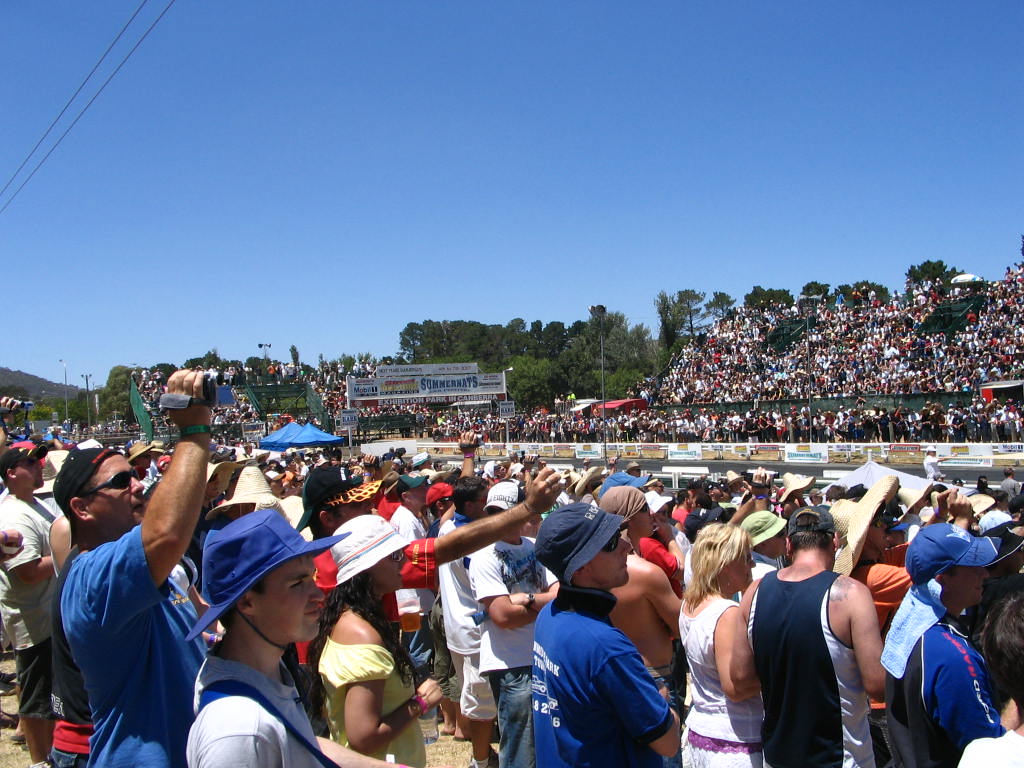 “And let them have a laugh at their passions, because what they call passion actually is not some emotional energy, but just the friction between their souls and the outside world.” Stalker (dir. Andrei Tarkovsky, 2009)

The photograph on the cover of the ‘Enthuse’ issue of M/C Journal was taken at the 2007 Summernats car festival. It captures the complete attention of a crowd of spectators watching the burnout competition. A burnout competition involves cars driven at full throttle for three minutes to spin the wheels, while not allowing the car to move. The tyres become molten and the rubber breaks down, turning into smoke. Drivers are judged according to the spectacular nature of their performance. It is one of the ritualised practices of modified-car culture whereby enthusiasts, mostly males, perform a spectacular motility (mobility potential) afforded by heavily modified vehicles. The burnout competition is a spectacularised test of mechanical endurance.

Modified-car culture has many dimensions that cut across familiar scholarly lines of inquiry from subaltern studies to gender studies and from youth subcultures to socio-technical studies. As a complex assemblage of sometimes contradictory tensions and tendencies there is one element of modified-car culture that is shared by all those involved in it: enthusiasm.

Enthusiasts of different scenes within the culture organise around their respective enthusiasms. Mechanical workshops and other technical businesses that service these scenes have an appreciation of the enthusiasm for the purposes of sustaining and commodifying it. Governmental authorities have an appreciation of enthusiasm because they attempt to mediate and regulate it. The cultural industry, which includes the magazine industry, memorialises and valorises certain elements of the scene to help incite, distribute and repeat the enthusiasm.

Every enthusiast practice that deserves to be described as such is a differential repetition of the core problematic of modified-car culture born of the pre-hot rodding scene in the US during the 1920s and 1930s. Secondary and tertiary markets for automobiles emerged due to the existence, for the first time, of a large supply of second hand and wrecked motor vehicles. The proto-enthusiasts would maintain or even assemble (from what was practically junk in some cases) their own automobiles. These mostly young men were mobilised into action by a congruence of the challenge of mobility, the cultural capital of motility, the socio-technical challenge of the vehicle, and the challenge posed by participation in a new social dynamic precipitated by the forthcoming automobilisation of society. It is this singular multi-dimensional challenge that has been repeated all over the world in different ways by several generations of enthusiasts. When the burnout competition competitors are spinning the wheels of their cars they are spectacularly performing an excess of motility; they have risen to the challenge and the acrid smell of burnt rubber is their satisfaction.

All magazine articles that report on the Summernats always feature a number of shots capturing the satisfying mechanical destruction or endurance of the burnout competition. The role of the media is to isolate and capture the specific conditions of enthusiasm that belong to a particular event what could be called the ‘action’ of a scene. To use something of a platitude, enthusiasm is active when ‘rising to a challenge’, but there is a passive dimension of enthusiasm as expressed on the faces of the burnout competition spectators. The cultural industry that services the scene of an enthusiasm has to balance between capturing the conditions of the spectacle’s passive enthusiasm, so enthusiasts buy magazines for example, and the challenge’s active enthusiasm, so enthusiasts reproduce the conditions of the scene that the cultural industry services. The cultural industry distributes and repeats the event of enthusiasm; its power is to modulate the affects of enthusiasm in active and passive inflections.

The question of authenticity is something of a mute point when it comes to enthusiasm as Goetz Bachmann and Andreas Wittel suggest in their article, “enthusiasm cannot be faked.” Bachman and Wittel isolate a problem within the cultural industries of how to mediate and integrate different, often competing or contradictory, enthusiasms. The setting for this exploration is an ethnographic and experimental project, conducted in 2003-2007 in London’s creative industries, brought together three industrial and one academic partner to produce a reality TV show. Bachman and Wittel outline how the enthusiasms of both the producer and consumer cohorts of the reality TV show need to be analysed. Their role as project managers, in part, was to “rebuild an enthusiastic spirit after periods of frustration” amongst their creative industry partners.

Bachman and Wittel explore the power of enthusiasm and indicate the ways that power is recuperated within the machinations of the ‘creative industries’. Indeed, ‘enthusiasm’ is shorthand for describing the process by which bodies are mobilised into action and the power of the imagination is drawn upon. For modified-car enthusiasts it is the translation of head-scratching socio-technical problems posed by the automobile into challenges. A ‘problem’ and a ‘challenge’ are both open multiplicities; that is, they are both characterised by a processual relationality open to an uncertain future. A ‘problem’ diminishes or even shuts down bodies, but a ‘challenge’ enlarges the respective body’s capacity for action. The solution to a problem may result in a feeling of satisfaction, but it is the challenge that incites enthusiasm within and across mobilised bodies.

Bodies are captivated by enthusiasm. Enthusiasms have often been described in metaphors of infection—‘I got the bug,’—and Hilary Geoghegan’s paper engages with the ‘disease’ wrought by ‘sexy concrete.’ In recounting the organisational dynamics that emerged around amateur and professional Industrial Archaeology, her paper also raises question regarding the spatial dimensions of enthusiasm. Similarly, Clementine Hill examines the strong emotional connection to Darwin expressed by those artists and other creative practioners who have ventured or returned to the city. Through extensive empirical work she reflects upon the intensity afforded by Darwin’s relatively unique environmental and geographical character, and how this impacts on creative practice. She uses enthusiasm as a measure to explore her interviewees’ relation to Darwin configured, somewhat atypically, as a ‘creative city’.

Enthusiasm can be used as both tool and resource. Beyond the enthusiasms harnessed by the cultural industries, Rebecca Hazleden examines some of the ways in which the discourse of ‘relationship manuals’ enthuses readers through a process of trust-based subjectivisation. Readers are in part captivated by the charismatic advice forwarded by the celebrity authors (familiar to watchers of daytime television). The flipside of enthusiasm as a resource, is to use it as an analytical tool. Meera Atkinson uses enthusiasm as an analytical tool to explore the blondeness of Monroe and Madonna. These figures are born of a femininity that embody differential repetitions of blondeness to present libidinal and social objects of enthusiasm.

Last, but not least, are two fascinating papers that emerge from the conditions of enthusiasm within subcultural practices. Kathleen Williams engages with the new media culture around user made film trailers. Users assemble their own trailers for films (both real and imaginary) which problematise the assumed understanding of trailers as mere advertisements for forthcoming films. She argues that these practices “liberate the trailer both from the cinema and the feature film.” Her analysis also involves very interesting questions regarding the temporal character of enthusiasm. If a film ‘trailer’ (or perhaps, in this case, ‘preview’) operates to enthuse an audience into watching a film, what the audience consumes is not so much the film but a kind of participation in the event of the film itself. That is, the event of the film is differentially repeated in studio controlled ways through promotional material as a mechanism for cultivating the enthusiasm of a potential audience. These subcultural fans break with the well established mediated mechanism for audience individuation and work with the mechanism itself.

Wilson Koh addresses what could be considered the most Kantian of questions regarding enthusiasm: what is 'our' relation to our 'own' enthusiasms? He explores the complex subcultural community of fans that follow professional wrestling in the US. The fans are largely separated into two groups: the ‘smarts’ that know it is all a performative spectacle and the ‘marks’ that participate in the spectacle with the belief that the wrestling is ‘real’. Koh engages with the way the wrestler-characters and ‘behind-the-scenes’ machinations are represented in different ways for different segments of the fan-base audience. Is an awareness or ‘self knowing’ of the conditions of our respective enthusiasms a way of destroying enthusiasm? Perhaps awareness precipitates another iteration of challenge of enthusiasm?

Glen Fuller completed his PhD at the Centre for CUltural Research, University of Western Sydney. After working as a casual academic at various universities he currently works as a writer at Express Publications.