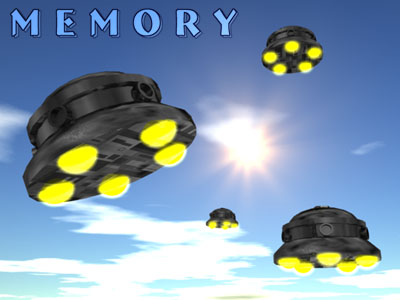 A curious sense of the past, the present, and the future is evoked when I consider the sweeping curves and gleaming surfaces of the rocketships, rayguns and UFOs beloved of 1950s SF illustrators and filmmakers. A sense of the past, of course, because they are things of history, designed and conceived at the pre-dawn of the space age, and representing an old aesthetic and innocent notions of infinite progress and glistening technology. Modernity, pure and distilled. A sense of the present, because these designs and aesthetics are constantly being reworked, re-modelled, re-contextualised and re-incorporated into new images and artefacts by highly reflexive and postmodern designers. In them, I also see the future, because the present imagery of space travel is somewhat lacking in boldness and excitement. Humans went to the Moon a few times in a stubby little module, left most of it behind, and never returned. Whereas in the old movies (Forbidden Planet, Destination Moon, Flash Gordon), we elegantly traversed the ether in giant rockets that looked like interplanetary cruise liners. It's a strange nostalgia, to feel that we lost something we never really had.

The second world war temporarily suspended the production of designed consumer artefacts, as the production resources of nations were funnelled into military purposes (McDermott 17). The devastation that the war caused meant that resources and money were in short supply for many years -- it was not until the 1950s that Western economies had sufficiently recovered for excess to come back in fashion. With it came new materials and technologies like nylon and anodised aluminium, developed for the war effort, and soon to be channelled into commercial applications. The explosion in fashion and industrial design has been called by Leslie Jackson "The New Look", after Christian Dior's "New Look" spring collection of 1947 (Jackson 7). The extravagance of Dior's New Look was initially funded by the French Government, eager to exploit the nation's reputation for excellence in design. There was initial hostility to such extravagance from nations inured to hardship and utility, but this soon dissipated (8). Overwhelmingly, a post-war austerity was replaced by a "vision of the future" (McDermott 19). Nowhere was this vision more evident than in the excitement over space exploration (21). Science and design again interacted at a high level and the symbols of the atom and the rocketship became central motifs in the New Look (21), harking back to Art Deco, the style movement of the 1920s, which was one of the first movements to apply contemporary technology to design.

Industrial design became highly influenced by the organic sculpture of Moore, Calder and Arp (McDermott 20), and the preference for curving, fluid shapes became evident in everything from automobile design (complete with rocket fins) and interior decoration (20).

It was a period where the visions of the future seemed to perfectly match the reality. Anything seemed possible. Space exploration was gearing up, Science Fiction was in its golden age, authors such as Heinlein, Asimov, Bester and Clarke were at the height of their creative powers. The UFO movement began in force with the activation of American military groups investigating sightings. Science Fiction films, when they weren't agitating over pseudo-communist alien menaces, depicted space travel as effortless and everyday occurrences. And the tool by which this was accomplished was the rocketship.

There was a democratic notion of technology attached to these early visions of interplanetary craft: plot lines would frequently revolve around inspired individuals constructing their craft in back yards and sheds, sponsored by enlightened commercial interests. Truly, the American Dream. Technology and power that anyone could access, wrapped in a free-market ideology that was, ironically, almost eliminated by the billion dollar budgets of the resolutely governmental NASA Apollo projects, but still lives on in the cult of hobbyist miniature rocket builders.

Much of the inspiration for the shape of those rocket ships undoubtedly sprang from the same well as contemporary aircraft design (indeed, many leading SF writers of the time were trained physicists and engineers). Central themes in the rocket designs were cigar shaped bodies, sweeping wings and foils; they usually took off like aeroplanes as well.

This aesthetic stayed in SF illustration and filmmaking until the late 1960s, when Kubrick's 2001: A Space Odyssey and the success of the Apollo missions changed the design paradigm forever. No longer were spaceships smooth tapering rockets. No longer did aliens arrive in spinning metal discs. In their place were textured and massively detailed objects, the functional products of heavy industry. Star Wars added speed, dirt, and rust to the equation. And so it remained, until the 1990s.

The 1990s have become a time of (certainly not quiet) reflection, of looking to the past for fashion and philosophy, to rework, to revisit. In the early 1990s, music became the target, and first the 1960s, then the 70s, then the 80s were plundered for riffs, lyrics and attitudes. That's died down -- stealing from the early 1990s would be galling even for Oasis. Two very different media forms, Cinema and computer games, have taken up the challenge of stealing from the past. The 1980s are at last a definite historical era; ripe for parody, even if it can't be taken seriously just yet. And digital art makes the old look newer than ever. Like a pristine and gleaming Ed Wood movie, Tim Burton's Mars Attacks made the flying saucer cool again; The X-Files reworks the hoariest of horror and B-movie clichés with knowing, post-modern humour. The instruction manual for the computer game Fallout hilariously revisits 1950s cold war nuclear paranoia with cartoon diagrams depicting duck and cover techniques. In the game itself, a crashed flying saucer (complete with large headed skeletal remains) delivers to the player a powerful raygun (which despatches the mutant foe with a dayglo disintegration effect) and a velvet covered photograph of Elvis.

These icons have remained with us, transformed, almost forgotten, from the age of the Atom (to rework Nicholas Negroponte) to the age of the Bit. If the visionaries are right, we might be headed back to atoms, with the oncoming Age of the Nano: technology that's constructed atom-by-atom into motors, circuits and eventually, perhaps, robots. If it happens, the economic and ideological constraints on our cultural and industrial production will fall away almost over night. Freed from our limitations, who's to say that the space vessels of the future might not take any shape we wish -- even those old fond shapes of our distant memory? The rhetoric is exciting, but I'm reminded of the optimism about atomic power. Time will tell.