Games R US - and Most of the Western World as Well

The Hegemony of the Strategic Computer Game 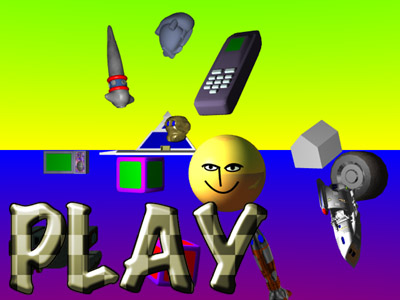 Postmodern theory, quite rightly I think, warns us against the grand narratives of modernism; the stories that purport to show history as a progression to a present or future enlightened state. Such narratives are problematic because they produce the idea that history is somehow inevitable and fixed and perfectly knowable.

The god game is a sub-genre of the strategy game -- a genre that grew out of an analogue hobby: warfare simulations and board games. When transferred to the computer, the genre took with it many of its built-in restrictions -- "playing fields" composed of hex grids, elaborate tables charting vital statistics, and a "turn-based" playing regime. The advantages of the computer were that it could automate a machine opponent for the human player to compete against -- and it also automated the various dice rolls and charts that made the games tedious to the uninitiated.

Most of these warfare simulations limited their subject matter to specific historical settings -- great battles and so on --, but the transfer to the digital medium enabled more ambitious aims. Simply put, to chart and direct the course of human history.

The two first and still most famous attempts to do this were Sim City and Populous. The former put the player in the role of mayor and town planner, and charged them to build and maintain a city. The latter conferred on the player Godhood -- and placed them in charge of a small band of worshippers who had to be looked after by changing the landscape and calling down volcanoes and earthquakes on rival tribes.

These games look primitive today, but they developed and refined the conceptual and visual vocabulary (particularly the "gods-eye-view" -- the sense of viewing and manipulating the events on screen from a great distance that paradoxically imparted perfect detail) that virtually all their successors would utilise.

It was a game (portentously) called Civilization that would first marry the god game elements and the strategic warfare elements with a codified and modular map of human history. In it the player was directed to lead a tribe (the English, the French, the Egyptians etc) throughout human history, researching new technologies, exploring, fighting, conquering, until the space age. The final goal, the telos, was to construct a spaceship that could successfully transport the player's chosen tribe to the Alpha Centauri solar system.

The choice of tribe affected a few initial starting conditions -- principally the number of beginning technologies. But other than that it assumed no overriding cultural differences or imperatives and imposed on all an ahistorically westernised path of conquest and colonialism. Historical changes and events were rendered into discrete, abstracted symbols -- monuments to build and place in a player's city. And these symbols were resolutely western -- Shakespeare's Globe, Darwin's voyage on the Beagle, the Manhattan project.

I don't think it is too much to suggest that computer games such as this are highly effective tools of the hegemonic apparatus, through their seductive encoding of specific historio-political models through an entertaining front end.

The time is ripe to begin to develop more sophisticated and resistant reading strategies to respond to these most beguiling of games.