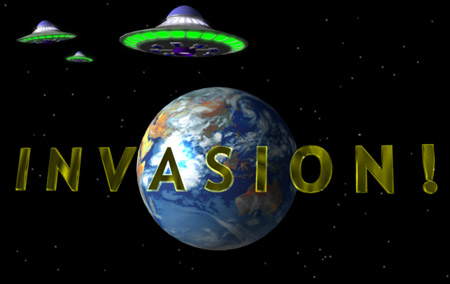 Narratives of invasion have been stock in trade for science fiction in film and on TV for many years now. It's not hard to see how this began; at least at the conceptual level, visual SF tends not to be greatly innovative, drawing much of its iconography and subject matter from written SF produced in the 30s and 40s -- and in that time period, invasion and imperialism was something of a hot topic. But invasion narratives in visual SF are still extremely popular and prevalent even today (witness the X-Files' overarching storyline), which suggests the reasons may be not so much a matter of any lack of innovation and more an issue of some wider cultural value.

To address some of the implications of this I want to turn to the British TV series, Doctor Who, which, in its twenty-five year run, explored practically every possible variation of the invasion narrative.

One of the aspects of the show that both its native viewers and its "colonial" (I use the term here very loosely, and to describe fans and viewers in Australia, the US and NZ) fans seem to find especially valuable and interesting is what they invariably term its "Britishness". This Britishness manifests itself particularly in the persona of the lead character, the Doctor, an alien time-traveller who nevertheless is typically garbed in Edwardian jackets and is fond of cricket, tea, and jellybabies (though not all at the same time).

Time and time again, the Doctor must save the Earth (and occasionally other planets, and sometimes the Universe) from hordes of monstrous foes. Well, when I say "Earth", I mostly mean England. In the greater London area. This is clearly demonstrated in an early story from 1964, featuring the Doctor's oldest foes, the Daleks, who have come to Earth in the 21st century to enslave humanity and mine the planet's core. The Daleks are depicted gliding unstoppably through an eerily deserted London, exterminating any stray humans they encounter. Nothing is shown of any other city or country on the planet -- we are therefore encouraged to view London as the paradigmatic representation of Earth. The image recurs through the course of the series: on every planet the Doctor visits, the inhabitants speak impeccable BBC English.

The harsh budgetary restrictions and unforgiving production schedule undeniably shaped this seemingly complete insularity. And indeed the pluralistic humanism that informed the show's best episodes mitigated its insular tendencies a good deal. I think it is possible to see it as symptomatic of a wider cultural force -- the burden of Empire. It is almost inescapable that Britain's status as a fading colonial power becomes inscribed in its popular fiction texts -- and particularly SF offered avenues for the recuperation of this status through technology, for instance. Both Doctor Who and its near-contemporary, Quartermass, offered visions of Britain leading the space race with manned flights to Mars and the outer solar system.

The Doctor's main foes, such as the Daleks, the Cybermen and the Sontarans, for instance, were frequently depicted in the course of the series as taking humans as slaves for labour work and experimentation. In one particular case, the slaves were all portrayed by white South African actors! Certainly a very tangled set of ideological interrelations operating out of this unease at the cost of colonialism. Ultimately, however, the vision of the Doctor, a capable British eccentric saving oppressed peoples from tyrannical governments and marauding invaders, must surely be another gesture towards the kind of cultural and moral recuperation that I've alluded to.