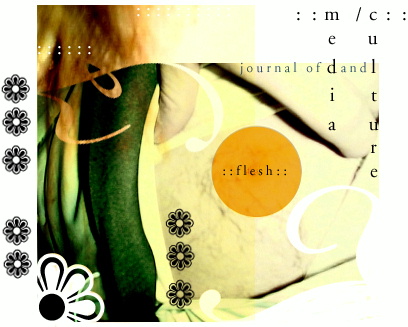 From the sensuous scenes of culinary delectation and preparatory foreplay in Eat Drink Man Woman to the current crop of texts infused with metaphors of consumption as assimilation, writers and filmmakers have signified diasporic Asian bodies by merging cultural and racial markers. This is an introduction to the issues involved in representing the Asian body in diaspora and the politically fraught issues for racial minority populations in majority 'white' nations. Examples in this piece skim from Japanese-Canadian literature and metaphors of ingestion to racial minority identity politics in the United States.

In Chorus of Mushrooms, a novel by Japanese-Canadian Hiromi Goto, one of the foci for the Tonkatsus' cultural change-over from the Japanese to the Canadian side of the hyphen is a determined alteration in eating habits. 'Western' food is the only type provided and the grandmother, Naoe, comments that her daughter has "converted from rice and daikon to weiners and beans" (13). In many ways, Keiko tries to force her family to eat their way into a new Canadian skin. Ostensibly, through the absorption of Western-style Canadian food, the Tonkatsus would achieve the goal of becoming one of 'them'. Using metaphors of cultural miscegenation, Keiko's daughter Muriel, as well as Obasan's Naomi and Stephen Nakane, could be described as 'banana'-yellow on the outside, white on the inside (Brydon 104). In the Asian-Australian literature and politics Webpages, The Banana Schtick, this term is reclaimed deliberately and defines specific issues for Asian-Australian writers and academic work which bypass the usual 'area studies' presumptions. This customarily derogatory metaphor is used by those within and without racial minority communities, across most class groups, barring the embedded invisibility of whiteness. Similar metaphors which denote the clashing (or possible melding) of races or cultures include the use of the term 'oreos' for African-Americans who take on what are deemed white, middle-class characteristics, or who do not act 'like a negro should' (Dyson 222). The term 'apples' has referred to Native Americans and 'coconuts' to individuals of South-East Asian or West Indian origin.

The plethora of food metaphors link these models of hybrid identities with notions of cultural consumption and ingestion. Yau Ching, while examining Ang Lee's film Eat Drink Man Woman, observes: "those close-ups of the kungfu of chopping and stir-frying constitute a postmodern version of the West's Chinoiserie. I felt like I was stripteasing, selling something that I didn't have" (31). Yau's positioning as a part of the 'striptease' offered by the highly detailed shots of food preparation evokes discomfort. The scenes are meant to be evocatively 'Chinese' and operated as cultural shorthand: "food thus serves as an index of the imaginary 'heritage' passed on, the racial symbolism, the alimentary sign of Chineseness" (31). This obsession with the minutiae of process and material becomes a part of what Shu-Mei Shih calls a "porno-culinary genre" (1), another way for 'chinese-ness' to be observed, assessed, and ultimately consumed. A site that reacts explicitly to this commodification of Asian-ness, and particularly Asian women, is Mimi Nguyen's Exoticise This! It provides an excellent listing of Asian feminist and Third World women's resources, zines, and creative work. Notably, it is one of the few critically engaged, non-pornographic sites that will appear during a search for "Asian women" using Web search engines or directories.

As pointers of racial/cultural doubling, the food markers mentioned above assume a constant social or mental bearing as 'towards white': white as the centre, as the most desired once again. The community or familial censure that this 'doubling' encounters could be read as a start in eroding the assumed attractive power of being 'white,' except that the judgments are based on essentialist ideas of what white/non-white means (in behaviour, talk, etc.) and their incompatability. This mode of reasoning maintains that a subject must be one side of the hyphenated identity or the other. For the most part, the terms used to describe the 'whitened' Others are analogous with various versions of raw produce and organic perishables. Conversely, "whiteness [is] often signified ... by commodities and brands: Wonder Bread, Kleenex, Heinz 57. In this identification, whiteness [comes] to be seen as spoiled by capitalism, and as being linked with capitalism in a way other cultures are not" (Frankenberg 199). The condition of whiteness as embodying capitalism inflect various constructions of western 'modernity', as well as the assumption that this kind of modernity is the logical state to which all nations and communities aspire. The growing area of 'whiteness' studies, and publications like Race Traitor, challenge this notion of a neutral flesh colour. The tokenistic acceptance of racial minority communities promotes divisiveness by allowing only a narrow range of representation for 'coloured' peoples. This perpetuates the masking of white privilege in that it remains the always-present and never-questioned. David Palumbo-Liu, an Asian-American race theorist, presents the symbiotic relationship between Korean-Americans and Anglo-Americans in the 1990s as an example of this creation of self-destructive alienation. He uses the incidents surrounding the 1992 Los Angeles riots, post-Rodney King trial, to emphasise how "Korean-Americans were represented as the frontline forces of the white bourgeoisie" (371), protecting their goods and property, being part of the capitalist programme which enabled them to become asset-rich 'Americans'. In most images and reports, the presence of white Americans (in downtown south-central Los Angeles) was elided while that of black Americans was amplified. Ruth Frankenberg suggests that "racist discourse ... frequently accords hypervisibility to African Americans and a relative invisibility to Asian Americans and Native Americans" (12). Palumbo-Liu states more specifically:

the locating, real and figurative, of Asians in between the dominant and minor is made less tenuous and even rationalized by a particular element which situates Asians within the dominant ideology, and frees them of the burden of their ethnicity and race while retaining (for obvious ideological purposes) the signifier of racial difference: the notion of self-affirmative action. (371)

The basic desire to be accepted/assimilated into majority white societies has meant that, in some instances, Asian citizens are complicit with the promulgation of certain stereotypes of themselves. Bypassing the expectations and approvals of white society altogether are increasing numbers of Asian-Canadian and Asian-American texts, whether in the form of novels, magazines (such as Giant Robot), or films, which do not assume a white audience but, instead, one that recognises the stereotypes and amalgamations of being part of diasporic Asian communities in North America and elsewhere.