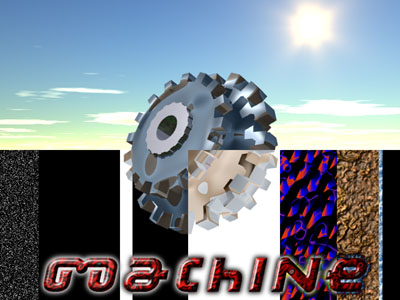 Briareos: If it's so quiet, then why do they need machines like that? I thought it was supposed to be peacetime. I'll tell you why-eighty per cent of the people here are artificial. Genetic engineering's out of control! -- Shirow, Appleseed 1.5: 37.

Welcome to the 'machine' issue of M/C, appropriately mediated to you through the global network of machines sometimes known as the Internet. The question of the machine might seem a curious one for media and cultural studies scholars -- after all, commonsense tells us that whilst machines may let us practice culture or produce media, they are by definition not cultural. The cultural, the human, the social, is that which is left after all the nonhuman components have been properly contained within a 'machine'. And yet, what is a machine? When we talk of the machine in everyday discourse, it is always, explicitly or implicitly, part of a binary opposition between humans and machines, between motive biology and immobile artefacts, between active subjects and passive objects.

In a similar vein the machine is always spectral, always metaphoric: it is one of the defining tropes of our industrialised civilisation. Whether it is the machinic Gehenna of H. G. Wells's or Fritz Lang's nightmares, all demonic steam engines and inhuman cogs; the shadowy, fifth column clones of Appleseed or the invasive 'Alien' that is micro-computerisation, the Human Genome project and nanotechnology, the machine is a metaphor that structures all levels of our relationships to culture.

In scientific thought, at least since Newton and Descartes, the world has been composed of machines -- instruments which transmit and direct force, and which can be investigated, manipulated, invented. In humanistic thought, the machine is the other, the Frankenstein, the binary category against which the human gains its definition. It is the gleaming machine against which unruly women have been defined, the efficient machine against which uncontrollable mobs have had no recourse, the starkly military machine against which disenfranchised and colonised peoples have had no recourse but death. The machine is thus a significant cultural category, organising and policing ideological, discursive, historical, spiritual and political boundaries.

Our second feature article is by the feminist philosopher and sociologist of technology, Zoë Sofoulis. In an article entitled "Machinic Musings with Mumford", Sofoulis returns to historian of technology Lewis Mumford for ideas about the role and purpose of machines in cultural development. She suggests that the machine's fascinating autonomy may inspire notions of the 'post-human', which can be critiqued from Mumford's humanist position as well as Latour's "non modern" stance. Taking up Mumford's point about the over-emphasis on machines in technology studies, Sofoulis argues that it is important to look at machines not just as things in themselves, but also the purposes they serve.

A concern with the work of Guattari returns in Andreas Broeckmann's article "Minor Media -- Heterogenic Machines". Broeckmann reads a series of works by contemporary artists through the prism of Guattari's writings on art, media and the machine to argue that the "line of flight" of such media experimentation "is the construction of new and strong forms of subjectivity". Such artistic practices, which draw upon the networking and transformative features of digital media, Broeckmann suggests, "point us in the direction of the positive potentials of post media".

'Desire' Issue Editor Laurie Johnson takes a slightly different tack in this issue by developing a reading of classic 50s SF film Forbidden Planet in order to come to terms with deleuzoguattarian theorisations of the machine. He asks the question of Deleuze and Guattari: "how can we use a concept of machine that claims to go beyond the concept of utility (or techné, the function of technical machines)?" Johnson's article "Félix and Gilles's Tempestuous, Monstrous Machines" develops through a sophisticated cross-reading of Forbidden Planet with its source text, The Tempest, and the analysis of civilization that Deleuze and Guattari elaborate in Anti-Oedipus: "what the film demonstrates instead is that stripping a civilisation of its instrumentalities produces something other than just a return of the primitive repressed".

In "From Haptic Interfaces to Man-Machine Symbiosis", Sonja Kangas provides an historicised account of the ways in which humans and machines interact with one another, which develops into a discussion of the problems of interactivity from the paradigm of game interface design.

Drawing on the notions of cultural capital as developed by Pierre Bourdieu and the theorisations of the cyborg by Donna Haraway, Susan Luckman in "XX @ MM: Cyborg Subjectivity as Millennial Fashion Statement" addresses "some of the ways in which the traditional determinants of class are being redefined in light of the so-called postmodern capitalist information economy". In doing so she brings in "nerd chic", cyborgs, rave culture and I-Macs.

Paul Benneworth, in his article "The Machine as Mythology -- The Case of the Joyce-Loebl Microdensitometer", takes us on an archeology of technology, examining the history and the fate of a small, pre-digital measuring device, the microdensitometer. His social history locates the device within its geographic and historical -- as well as its technological -- milieux, to demonstrate that the existence of any machine depends upon far more than merely its technical characteristics; that every machine is a social machine.

If the machinic philosophy of Félix Guattari is the refrain of this issue of M/C, then Donna Haraway's cyborg metaphor is its melody. Drawing on the work of Haraway, Sophie Taysom's article "True Love Is a Trued Wheel: Technopleasure in Mountain Biking" seeks to make clear some of the ways in which mountain biking magazines have an important role in negotiating the boundaries between the "inside" and "outside" of mountain biking practices. Taysom achieves this by conducting a semiotic reading of this magazine genre, to prise open the trope of technology and see how it is reconfigured both literally and figuratively within their pages.

Frances Bonner takes to task the highly gendered division in Science Fiction of "hard" and "soft" SF through an analysis of the representations of the 'technological' in Lois McMaster Bujold's Vorkosigan saga. As Bonner explains, this series is not so easily placed in either category, mixing as it does the tropes of space adventure with explorations of the ramifications of advanced reproductive technology.

The engagement with the work of Guattari returns as a coda in Belinda Barnet's article "Machinic Heterogenesis and Evolution: Collected Notes on Sound, Machines and Sonicform". Hotwiring together Guattari's machinic philosophy with the work of the complexity theorists such as Stuart Kauffman and Ilya Prigogine, and using the example of the self-organising and evolving Sonicform Web site/sound system, Barnet examines the use and spread of evolutionary metaphors beyond their scientific origins. As she points out, "evolution is not just conflict, competition, selfish genes, tree diagrams, living and non-living systems. It's not just something furry, crawling things do. It's music. It's a dance. Poetic-existential. Hybrid subjectivities. And all the wor(l)ds in between".