"You Have a Basket for the Bread, Just Put the Bloody Chicken in It" 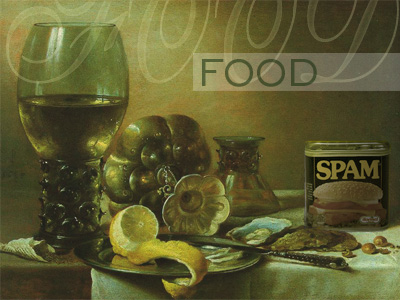 We'd eat at Cahill's, Cahill's Family Restaurants I believe they were called, and quite plushy looking ... . At Cahill's we'd eat Viennese Schnitzel, with potato salad and some nice red cabbage salad, sort of pickled ... . Even more exotic was Chicken Maryland, served with a banana and a slice of pineapple in batter. It cost 7s 6d. -- Marion Halligan (11)

We migrated in the sixties. Born in Cape Town, I was raised in the heart of Jewish Bondi. The flavours of my youth? Probably equal parts peri-peri, horseradish and chicken booster, not bouquet garni. My introduction to what was 'Australian' food was had in restaurants. And yes, I remember Cahill's, though I can't tell you when exactly, or how much things cost. Mid-sixties. I knew, even then, that there were better restaurants, like the places Dad used to take us with checked tablecloths and bottles with candles dripping wax and fish nets everywhere. His favourites were Mother's Cellar and The Gap at Watson's Bay. I think it's still there. This was before they built Australia Square and Dad became obsessed with the Summit, and of course the Blue Angel, where we never doubted that the lobsters were live.

Favourite dishes? I would only eat 'chicken in a basket' or spaghetti bolognaise; well, I was very young, and prone to tears. I can remember my father, losing patience and insisting, "you have a basket for the bread, just put the bloody chicken in it". I can't even remember what it was, probably the same Chicken Maryland Halligan mentions, or a cousin. Fried chicken with a battered pineapple ring and chips of course, sometimes magically grated to form a lattice.

I know I enjoyed going out to eat but all meals held the prospect of tension. Visser says the tension arises from the prospect of ending up as a main course. In my case, a mere hors d'œuvre for my sarcastic oldest brother. I was the youngest and unsure how to get the best, the most, as much, or even what I wanted. I wouldn't order until I had read the whole menu, which took long enough even when it wasn't in French or Italian. The menu rarely helped me, rather it served to frustrate my entire family because they knew I was going to order spaghetti or chicken anyway, but that made no difference, the menu had to be read before ordering, and no amount of harassment could convince me otherwise. I love the thought of that child, and her passionate sense of propriety.

On special occasions Dad would order Spumante and we would all have a glass, and I felt terribly sophisticated; fortunately the experience doesn't seem to have permanently damaged my palate. Spumante reminded Dad of Italy, the war, you know. Granny used to refer to this as "Henry's trip to Europe". My Dad loved the war, and I'm sure it's not all rosy nostalgia because it was the only time he got away from his family. He drove a truck and didn't have to kill anybody and all we ever heard about was the mud, the black market and the girls.

So a glass of cheap, sweet fizzy brought it all back, every time, and who am I to scoff, when the merest whiff of retsina and I'm floating in the bath-flat Aegean under a hot blue sky with anybody called Jani? Cahill's, meanwhile, was in the city, in the days when you 'went to town'. Going to town was always a treat but it depended largely on with whom and why. With Mum it meant serious shopping, and though there was the promise of lunch at David Jones Cafeteria, was it worth the endless hours of torture trying on shoes that were too small and school uniforms which were too big, but of course I would grow into them? And how could a pie with sauce in a plastic packet have been a treat?

Going to town with Nana was a different story. It was with some expectation that we would descend into the air-conditioned red-walled cavern that was Cahill's. What I remember about Cahill's was the occasion, and the fish and chips. Nana spent her childhood in a Dickensian orphanage and her adulthood in the North of England, waiting for my grandfather to pick a winner, so I imagine that she felt comfortable with what she knew. That she always ordered fish and chips is only strange because Nana was famous for her fish and chips, perhaps she liked to compare. And I really shouldn't find it odd when I find it difficult to order anything other than fritto misto; in two generations we've progressed to "trefe"1 but not past the deep fryer. So I'm sure that I ordered fish and chips too, or perhaps I ate some of hers, because that was the only thing to do, otherwise she would eat one piece, then look around before coughing theatrically into a serviette which she would then drop, casually, over the other piece and put it in her bag. It was absolutely awful, and we grandchildren loved it when she did that.

The other thing I have to say about fish and chips is that we Jews like to eat fried fish cold, but then we don't batter the fish, just flour and egg. I suppose it forms a batter anyway but it doesn't separate from the fish, and we like a solid fish, say kingfish, while Australians seem to go for thinner fillets encased in oily batter. Cahill's did something in between. To follow, tea for Nana, while I always ate fruit salad and ice cream; this I also used to eat on our Saturday afternoon excursions to the 'Cross' which Nana said reminded her of Paris, because it was full of 'artists' like herself. So Nana would sip her tea while I ate my tinned fruit salad and we enjoyed each other and the world, and what a delight for a chatty little girl, the undivided attention of such a beloved adult. I do believe that I will never feel as grown up, ever again, as I did when I was a little girl, out for lunch with my Nana.

So as you see I have a sentimental attachment to fish and chips. Their cooking and consumption have flavoured my childhood and possibly yours. The association of fish and chips with that Hanson woman2 is therefore particularly galling, and yet also pertinent. I've never believed that it's just a coincidence that she is purveyor of fish and chips; after all, fish and chips are emblematic of 'Englishness'. Hanson wants Australians to maintain their cultural identification with the mother country, she could hardly have achieved her profile were she the proprietor of a noodle shop.

So as you see I have a sentimental attachment to fish and chips. Their cooking and consumption have flavoured my childhood and possibly yours. The association of fish and chips with that Hanson woman2 is therefore particularly galling, and yet also pertinent. I've never believed that it's just a coincidence that she is purveyor of fish and chips; after all, fish and chips are emblematic of 'Englishness'. Hanson wants Australians to maintain their cultural identification with the mother country, she could hardly have achieved her profile were she the proprietor of a noodle shop.

Here lies the Great Divide and I fear that I may be part of the problem, not the solution. I am hoist on my hybrid petard, uncomfortably, because much as I dislike elitist Epicureanism I have seen that the reality of what we eat in this country is not always pretty. And all the best efforts of the proselytising 'foodie' media are falling on deaf or already converted ears. Back in the mother country, this battleground is already well trod:

there remains something shamefaced about the acceptance of fish and chips as a component of 'Englishness' among the 'better classes' ... . This set of perceptions attaches fish and chips to potent patriotic images of land, countryside, industrial might ... and above all, the notion of Britain as a gallant seafaring notion whose little ships do battle with the elements and the foreign enemy to feed and protect the people. (Walton 2)

I see Pauline, wrapped in the flag, battered hake in upraised hand ... and let's not forget that fish and chips were one of our first fast foods, at a time when there was little respite for women, often providing the only hot meal of the day, particularly for workers. Of course the practice was seen to be harmful by health care professionals. The consumption of food prepared outside the home was read as poor mothering, a breakdown in the process of policing of 'proper' families and of course no-one is sure just what sort of mother Pauline is. She appears to be estranged from her older children, a case of one Chiko Roll too many?

viewed in other moods and seen from other angles, of course, the image and associations of fish and chips could be very different. They expressed ethnic diversity as well as simplistic national solidarity, from the strong East End Jewish element in the early days of fish frying in London, through the strong Italian presence in the trade from the turn of the century, in urban Scotland and Ireland especially, to the growing importance of the Chinese and Greek Cypriots in the post-Second World War decades. (2)

So fish and chips have played a significant role for a number of ethnic groups. They're ours, not hers. But I'm still troubled, I need to tell the gastronomic mafia that Pacific Rim cuisine won't be Oz food until a significant number of Australians are eating it, and I'm afraid "mainstream Australia, out there" is eating extremely boring food. Could it be that the resentment against Asians is because their food is just so much better?

1. trefe: (yiddish) animals, seafood or insects considered impure, abomination, not to be eaten under any circumstances, notably pig and shellfish.

2. Pauline Hanson was elected to the Australian Federal Parliament as an independent candidate in 1996, and soon made her presence known with outspoken comments about Aborigines, (mainly Asian) migrants, and welfare recipients [ed.].

3. Stephanie Alexander is a noted Australian food writer and restaurateur, and her A Shared Table is the latest of a plethora of Australian television series celebrating our gastronomic abundance.