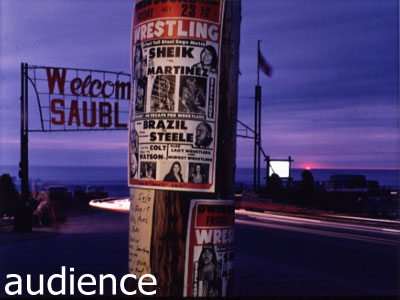 Audiences are a contested domain with Ang and others desperate to analyse, anatomise, understand and describe them. They are particularly important for the commercialisation of any medium since advertisers like to know what they are getting for their money and, in the famous aphorism, 'the role of the commercial media is to deliver audiences to advertisers'. Marshall's concept of 'audience-commodity' continues this intellectual interrogation of the audience and its production by individual practices of media consumption. Mass media audiences have consumed much research attention over most of the past century with major consideration being paid to the displacement of other activities arising from the consumption of newly-introduced media, effects of the media and a succession of moral panics. It has only been in recent years that 'the audience' has been researched on (essentially) its own terms -- in the branch of media and culture studies enquiry called, conveniently, 'audience studies'. Well- known Australian examples of such studies often concern children and adolescents and include: Hodge & Tripp, Noble, and Palmer (now Gillard).

Audience studies assumes that audience participants are sufficiently insightful and sufficiently cognisant of their various pleasures, desires and frustrations to be able to discuss their media consumption patterns with interested researchers. The paradigm takes as read that people have reasons for their behaviours, and sets out to uncover what these are through (often) a variety of interview and observation techniques. It accords audience membership an importance in people's lives. The nature of the 'general' audience is illuminated by specific comments and examples offered during the research process by specific audience members -- analysed and interpreted by the research team. What is clear from a cursory glance at the literature is that audiences do not talk about 'broadcasting' per se, they talk about specific programs and have a tendency to compare programs with others of the same type. Audiences perceive broadcasting as divided into genred broadcasting streams. Unless asked to do so, an audience member (and I've formally interviewed over two hundred such people) is unlikely to compare Home and Away with the ABC Evening News. Comparisons between Home and Away and Neighbours are commonplace, however.

What genre is the Internet? A silly question, I know -- but one that is begged by the repeated discussions of Internet culture, Internet communications and information and Internet communities as 'the Internet'. It's a long time since media studies and popular culture academics have discussed 'broadcasting' generically because concern for the specifics of genred broadcasting (both in television and radio) have rendered generalised discussion ridiculously global and oversimplified. In broadcasting we talk about television and radio as if they were (since they are) significantly different. We recognise that the production values for soap opera, drama, sport, news and current affairs and light entertainment are dissimilar. It's only silly to ask 'what genre is the Internet' because, when we think about it, the Internet is multiply genred.

Audiences that consume broadcast programmes can be differentiated from each other in terms of age, gender and socioeconomic status, and in terms of viewing place, viewing style, motivation and preferred programme genres. As Morley indicates in his 1986 treatise, Family Television: Cultural Power and Domestic Leisure, the domestic context is central to the everyday consumption of TV. He argues that "the social dimensions of 'watching television' -- the social relationships within which viewing is performed as an activity -- have to be brought more directly into focus if we are properly to understand television audiences' choices of, and responses to, their viewing" (15). That focus upon social relationships as the domestic context within which television is consumed is the substance of his book. Holmes suggests that much of the appeal of the Internet is a spurious one, viz. by selling "a new kind of community to those who have been disconnected from geographical communities" (35). He claims that society has been divided into a multitude of separate domestic spheres within which television is consumed, creating an isolation which the Internet is marketed as solving. "The Internet offers to the dispossessed the ability to remove some of the walls for brief periods of time in return for a time-charged fee" (35).

A key to understanding the domestic consumption of television, however, is an understanding of the specifics of genre, and the pleasures associated with the consumption of the genre. Uses to which the broadcast material is put in daily life in interpersonal settings are essentially related to the broadcast material consumed. Discussion of soaps, and of finance reporting, may both be used to develop interpersonal networks and to display current knowledge, but these discussions are likely to occur in different domestic/work contexts. Have we had enough of generalised discussion of the global Internet? Can we move onto addressing whether it is genred; and if so, in which ways?

Faced with the cacophony which is the Internet today -- let alone the projected manifestation of the Internet tomorrow -- we are forced to conclude that the Internet has the potential to mimic the features of all the media and genres that have preceded it, and more. It can operate as a mass medium, as a niche medium, and as one-to-one discrete communication -- Dayan's 'particularistic' media (103-13). Within all these categories it can (or has the potential to) work in audio, visual, audiovisual, text and data. On top of this complexity, it offers a variety of degrees of interactivity from simple access to full content creation as part of the communication exchange. You thought Media Studies was big? Watch out for the disciplinary field of Internet Studies!

The concept of the active audience has been a staple of audience studies theory for a generation. Here the activity recognised in the 'active' audience is one of the audience actively engaging with programme content -- resisting, reformulating and recirculating the messages and meanings on offer. This is a different level of interactivity compared with that implicit in some aspects of the Internet (online community, for example). Internet interactivity recognises that the text is produced as part of the act of consumption. Have the audience activity characteristics of online community members been sufficiently differentiated from -- say -- the activity of accessing Encyclopaedia Britannica online? Are online community members more of a 'www.participants' than an 'audience'; should we see audiences as genred too?

Television audiences (as my anonymous reviewer has helpfully remarked) are typically constituted via essentialising experiences' "generally domestic/familial setting, generally in the context of other activities, generally ritualised in terms of the serialisation of these experiences etc." We know that this is the case from detailed investigations into the consumption of television. Less is known about the experience of online participation, although Wilbur discusses "the strangely solitary work that many CMC [computer-mediated communications] researchers are engaged in, sitting alone at their computers, but surrounded by a global multitude" (6). He goes on to suggest seven definitions of 'virtual community' before concluding that the "multi-bladed, critical Swiss army knives" might offer an appropriate metaphor for the many uses of the Internet. 'Participation' in this culture is similarly hard to define, and (given that it is so individual and spatially private) expressive of individual difference. "For those who doubt the possibility of online intimacy, I can only speak of ... hours sitting at my keyboard with tears streaming down my face, or convulsed with laughter" (Wilbur 18). I wait for the ethnographic research before I venture further into definitions of 'www.participants'.

Online community, I would argue, is a specifically genred stream of Internet activity. Further, it is particularly interesting to audience researchers because it has no clear precursor in the audiences and readerships of the traditional mass media. Holmes (32) has usefully differentiated between 'Communities of broadcast' (using the generic term, to offer an exception to the rule!) and 'Communities of interactivity', but he does so to highlight difference -- not to argue great similarity. The community of interest brought into being by the shared consumption and social circulation of elements of broadcast programming differs from the community of interactivity made visible through online community membership -- and both differ from Anderson's notion of the imagined community. Online communities are particularly problematic for audience studies theorists because the audience is the content producer. There is no content apart from the interactions and creativity of community members, and the contributions of new/casual online participants. For sites where 'hits' are enumerated, the simple act of access is also content production, and creates value and interest for others.

Clearly the research is yet to be done in these areas. If we are to theorise cogently and in depth about people's activities and production/consumption patterns on the Internet, we need to identify genres and investigate specific audience/community members. Interactions with online community members suggest that age may offer a critical nexus of audience/participant distinction (Palandri & Green). Community members of 35+ have had to deliberately choose to learn the conventions of Internet interaction. They have experienced specific motivations. In affluent societies such as ours, on the other hand, for many people under 20, the required Internet skills and competencies have been normalised as part of an everyday social repertoire, in the same way that almost all of us have learned the conventions of television viewing. An understanding of the specifics of difference, and of congruence, will make discussions of Internet audiences/participants/content providers/community members that much more useful.

Such research has an added frisson. I started this article with an acknowledgement of Ang's book Desperately Seeking the Audience. The research to be undertaken in the Internet genre of online community includes the need to seek desperately for the audience; the individual audience member; and (in many cases) the individual audience member's multiple identities -- each of which offers specific and different value to the researched community member. Identity is a key issue for Internet researchers, and a signal difference between communities of broadcast and communities of interactivity. As Holmes has usefully pointed out: "broadcast facilitates mass recognition ... with little reciprocity while the Internet facilitates reciprocity with little or no recognition" (31). We need to acknowledge, recognise and explore these differences in the next generation of audience studies research.