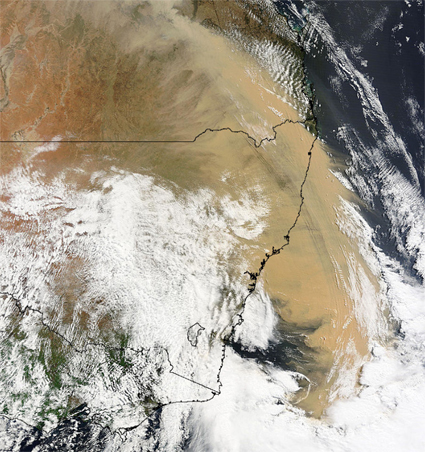 Climate is, presently, a heatedly discussed topic. Concerns about the environmental, economic, political and social consequences of climate change are of central interest in academic and popular debates. As such, climate change is a ‘hot’ cultural discourse and media issue. Moreover, there has recently been a ‘cultural turn’ in climate change science and politics, with some scholars arguing that climate change research and action has been hindered because it has not fully accommodated cultural values that give everyday meaning to climate, and consequently urging for greater attention to the cultural dimensions of climate change. As Mike Hulme asserts, “registers of climate can be read in memory, behaviour, text and identity as much as they can be measured through meteorology” (7) and thus “the idea of climate can only be understood when its physical dimensions are allowed to be interpreted by their cultural meanings” (6) (for specifically Australian examples, see Sherratt, Griffiths and Robin; Nicholls). Climate change is both a “physical transformation and cultural object” and requires new examination which “needs to start with contributions from the interpretative humanities and social sciences” (Hulme 5). Advancing these debates, this issue of M/C Journal adds to the critical interface of climate and culture, particularly in the context of climate change.

A number of key themes concerning the culture-climate nexus weave through the following papers. Most notably, the authors consider how climate and climate change are embodied and experienced at local and personal levels. Dominant earth systems approaches to climate have enumerated—rather than ‘felt’—local changes in precipitation and temperature, fixing these statistics to planetary models of global warming and thus cleaving changes in weather patterns from their localised cultural meanings and constitutive values (Hulme). Instead, a cultural approach emphasises that individuals ‘feel’ their environments through ‘embodied’ engagements with seasonal weather conditions (Palang et al; Ingold). Statistics cannot capture how these everyday visceral and emotional experiences will be altered by climate change. All the papers in this collection invoke felt, embodied responses to changing climatic conditions, from housing (Simpson), eating (Brien) and transport (Simpson), to disaster (Wolbring) and mitigation (Harrison) responses, to the very biopolitics of life (Potter).

Likewise, the authors in this collection indicate that anthropogenic climate change results from uneven, localised consumption. As commentators have noted, planetary statistics on global warming also cleave its ‘causes’ from local resource over-use, removing the ‘problem’ from the scope of everyday lifeworlds. Yet, just as climate change impacts will be felt locally, mitigation or adaptation must start with localised individual and collective responses. This might mean changing foodways (Brien), architecture (Sully), car use (Simpson) or energy consumption and its means of calculation (Potter). Simultaneously, these localised responses feed into wider global environmental governance attempts to address mitigation (Harrison) and adaptation (Wolbring). To this end, another critical contribution that cultural and media studies makes to this ‘wicked problem’ concerns communication strategies about climate change impacts, mitigation and adaptation. Communication is the central theme of Harrison’s paper, and is also addressed by other authors here (e.g. Wolbring, Potter and Simpson).

Our lead paper, by Emily Potter, provides a timely provocation on climate change as a ‘biopolitical terrain’, where ‘the politics of life’ undergird the debates unfolding across and between state, corporate and domestic spheres. She seeks to complicate moralistic discussions of ‘good’ and ‘bad’ environmental practices that have emerged in the wake of climate change concerns. Instead, Potter prompts us to recognise that the spectrum of investments by actors, interests and devices, across a range of spheres, is fundamentally focused on sustaining life. Life-sustaining practices and debates consequently weave through the subsequent papers.

Indeed, the following two papers are very much concerned with different ways of sustaining life, and how these practices are entwined with changing lifestyles. Donna Lee Brien’s paper focuses on foodways. She notes that eating is both a biological and cultural activity, and takes this interplay a step further by exploring how practices of eating are also bound up with environmental changes. Brien argues that awareness of climate change is prompting (r)evolutionary modifications in popular foodways, such as the Slow Food movement. She suggests, moreover, that further changes might be driven by increased insight into the connections between climate change and the social injustices of food production.

Catherine Simpson focuses on another key dimension of Western lifestyles: automobility. ‘Automobile dependence’ is a major challenge for climate change mitigation and adaptation. In response, Simpson considers how cars might be used differently, analysing the developing phenomenon of car sharing, with specific reference to its emergence in Sydney. She argues that car sharing is an ‘adaptive technology’ that both extends and subverts the flexibility and autonomy associated with automobility. Car sharing organisations and practices transform car cultures: instead of privately-owned and stridently consumerist vehicles, ‘philandering car sharers’ invest in different subjectivities and values.

Nicole Sully tackles climate-culture connections broadly, rather than modifications in the wake of climate change. Her focus is houses designed by seminal figures in Modern Architecture, and she discusses a number of pragmatic examples where climatic conditions became a contested issue in the reception of ‘the masterpiece’. In doing so, Sully shows the intimate links between dwelling and climate, and that effective building must account for weather and climatic patterns. She notes that these connections will be an increasing concern in the context of climate change, prompting greater attention to sustainable housing.

In the final paper, Karey Harrison focuses on communication about climate change and mitigation. She draws on her experience as a Climate Presenter in The Climate Project and wider theories of marketing and behavioural change. Harrison considers the usefulness of marketing approaches for prompting individual behavioural change, and how they work effectively alongside strategies that encourage transformations in wider business and social systems. She demonstrates that effective communication about climate change impacts and practices of mitigation is vital if we are to approach this ‘wicked problem’ with open eyes.

Together, these papers provide new reflections on the climate-culture nexus, especially in the light of climate change threats. Our cultures—lifestyles, habits, rhythms, practices—are bound up with climatic conditions. But our cultures will have to change in the wake of anthropogenic climate change. Everyday practices—of eating, driving and housing, for instance—will have to change in scenarios of either mitigation or adaptation. If we want to arrest climate change, we have to change our lifestyles. And if climate change can’t be mitigated, adaptation will also require lifestyle changes. Existing embodied connections to local environments and weather patterns will take new forms. The cover picture for this issue provides an example of possible changes in the weather. It is a NASA image of the dust storm that enveloped the east coast of Australia on 23 September 2009—something that, we have been warned, might become a more frequent occurrence (Osborne).

Thanks to the referees who reviewed the papers submitted for this issue. The cover picture for this issue is a NASA satellite image of the east coast of Australia from 23 September 2009 (Australia6 Subset—Terra Metadata 2km). NASA permits use of images “for educational or informational purposes, including photo collections, textbooks, public exhibits, computer graphical simulations and Internet Web pages” (see NASA imagery guidelines at: http://www.nasa.gov/audience/formedia/features/MP_Photo_Guidelines.html). The NASA website is: http://www.nasa.gov/. The website for NASA’s Godard Space Flight Centre, where the image originated, is: http://www.nasa.gov/centers/goddard/home/index.html. The direct link to the image is: http://rapidfire.sci.gsfc.nasa.gov/subsets/?subset=Australia6.2009266.terra.2km.

Hulme, Mike. “Geographical Work at the Boundaries of Climate Change.” Transactions of the Institute of British Geographers 33.1 (2008): 5-11.

Andrew Gorman-Murray is a Research Fellow in Human Geography at the University of Wollongong. He is a cultural, social, political and historical geographer, with broad research interests in the interlinking of space, place and identity. His particular research foci include geographies of sexuality and gender; geographies of home and housing; rural cultural studies; queer festivals and tourism; landscape studies; community studies; and the politics of belonging.

Gordon Waitt is Associate Professor of Human Geography at the University of Wollongong. He is a social and cultural geographer with interests in the intersection of space, place and identity. His areas of research include geographies of sexuality and gender; geographies of tourism; rural cultural studies; queer festivals and tourism; cultures of nature; nature tourism; and cultures of climate change.