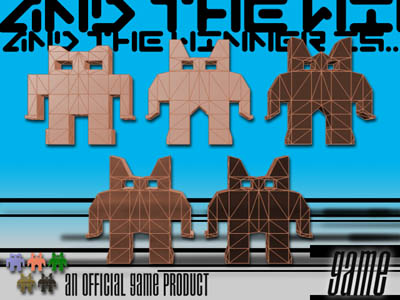 In his recent re-evaluation of McLuhanite theories for the information age, Digital McLuhan, Paul Levinson makes what at first glance appears to be a curious statement: he says that on the Web "the common denominator ... is the written word, as it is and has been with all things having to do with computers -- and will likely continue to be until such time, if ever, that the spoken word replaces the written as the vehicle of computer commands" (38).

This, however, seems to directly contradict what any Web user has been able to experience for several years now: Web content has increasingly come to rely on graphics, at first still, now also often animated, and continues to include more and more audiovisual elements of various kinds. We don't even have to look at the current (and, hopefully, passing) phase of interminable Shockwave splash pages, which users have to endure while they wait to be transferred to the 'real' content of a site: even on as print-focussed a page as the one you're currently reading, you'll see graphical buttons to the left and at the bottom, for example. Other sites far surpass this for graphical content: it is hard to imagine what the official Olympics site or that of EXPO 2000 would look like in text-only versions.

The drive towards more and more graphics has long been, well, visible. Already in 1997 (at a time when 33.6k modems were considered fast) Marshall considered the Internet to have entered its "graphic stage, a transitional media form that has made surfing the net feel like flipping through a glossy magazine or the interlinkages of a multimedia game or encyclopedia CD-ROMs"; to him this stage "relies on a construction that is textual and graphically enhanced through software overlays ... and highlighted by sample images, sound bites and occasionally short, moving images" (51). This historicised view mirrors a distinction made around the same time by Lovink, who divided users into "IBM-PC-modernists" still running text-based interfaces, and those enjoying the "Apple-Windows 95-postmodernism" of their graphical user interfaces (Lovink and Winkler 15). In the age of GUIs, in fact, 'text' in itself does not really exist on screen any more: everything from textual to graphical information consists of individual pixels in the same way, which is precisely what makes Levinson's initial statement appear so anachronistic. The move from 'text' to 'graphics and text' could thus be seen as a sign of the overall shift from the industrial to the information age -- a view not without precedent, since the transition from modernist to postmodernist times is similarly contemporaneous with the rise of graphic design as a form of communication as well as art.

Beyond such broad strokes, we can also identify some of the finer details presented by the current state of graphics on the Web, however. Marshall's 'graphic stage', after all, was a 'transitional' one, and by now it seems that we might have passed it already, entering into a new aesthetic paradigm which appears to have borrowed many of its approaches from the realm of computer games: the new Web vision is shiny, colourful, animated, and increasingly also accompanied by sound effects. This is no surprise since the mass acceptance of personal computers themselves was largely driven by their use as a source of entertainment. Gaming and computers are inseparably interconnected, and the development of home computers' graphical capabilities in particular has long been driven almost exclusively by players' needs for better, faster, more realistic graphics.

Of course, the way we interact with computers also owes a significant debt to games. Engagement in a dialogue with the machine, in which the computer displays both our own actions and its responses, representing us and itself simultaneously on screen, is the predominant mode of computing, and such a mode of engagement (dissolving the barriers between human mind and machinic computation) can now also be found in our interaction with the Web. Here, too, individual knowledge blends with the information available on the network as we immerse ourselves in hypertextual connectivity. As Talbott writes, "clearly, a generation raised on Adventure and video games -- where every door conceals a treasure or a monster worth pursuing in frenetic style -- has its own way of appreciating the hypertext interface" (13); not only has the Web taken on the aesthetics of computer gaming, then, but using the Web itself exhibits aspects of participation in a global 'knowledge game'. Talbott means to criticise this when he writes that thus "the doctrines of endless Enlightenment and Progress become the compelling subtext of a universal video game few can resist playing" (196), but however we may choose to evaluate this game, the observation itself is sound.

One possible reason for taking a critical view of this development is that computer and video games rarely present more than the appearance of participation; while players may have a feeling of control over features of the game, the game itself usually remains entirely unaffected and ready for a restart at any moment. Web users might similarly feel empowered by the wealth of information to which they have gained access online, without actually making use of that information to form new knowledge for themselves. This is a matter for the individual user, however; where they have a true interest in the information they seek, we can have every confidence that they will process it to their advantage, too. Beyond this, the skills of information seeking learnt from Web use might also have overall benefits for users, as a kind of 'mind-eye coordination' similar to the 'hand-eye coordination' benefits often attributed to the playing of action games. The ability to figure out unknown problems, the desire to understand and gain control of a situation, which they can learn from computer games, is likely to help them better understand the complexity and interconnectedness of anything they might learn: "it could ... well be true that the cross-linking inherent in hypertext encourages people to see the connections among different aspects of the world so that they will get less fragmented knowledge" (Nielsen 190).

The increasingly graphical nature of Web content could appear to work against this, however: "extensions of traditional hyperTEXT systems to encompass hyperMEDIA introduces [sic] a new dimension. ... The picture that 'speaks a thousand words' may say a thousand different words to different viewers. Pictures or graphics lend themselves much more than does text to multiple interpretations", as McAleese claims (12-13) -- but perhaps this overrates significantly the ability of text to anchor down meaning to any one point. Rather, it is questionable whether text and images really are that different from one another -- viewed from a historical perspective, certainly, opinions are divided, it seems: "the medieval church feared the power of the visual image because of the way it appeared to licence the imagination and the consideration of alternatives. Obversely, contemporary cultural critics fear that the abandonment of the written word in favour of graphics is stifling critical and creative powers" (Moody 60) -- take, for example, the commonly held view that movies made from novels limit the reader's imagination to the particular portrayal of events chosen for the film.

In fact, there are good reasons to believe that both text and images (especially when they are increasingly easy to manipulate by digital means, thus losing once and for all their claim to photographic 'realism') can 'say a thousand different words to different viewers' -- indeed, traditional photography has also been described as 'writing with light'. As Levinson notes, therefore, "once the photograph is converted to a digital format, it is as amenable to manipulation, as divorced from the reality it purports to represent, as the words which appear on the same screen. On that score, the Internet's co-option of photography -- the rendering of the formerly analogue image as its content -- is at least as profound as the Internet's promotion of written communication" (43), and this, then, may perhaps begin to provide a resolution to his overall preference for writing as the predominant Internet communication form, as quoted above: online writing now includes in almost equal measure 'print' text and graphical images, both of which are of course graphically rendered on screen by the computer anyway; they combine into a new form of writing not unlike ancient hieroglyphics. On the Web, writing has come full circle: from the iconographic representations of the earliest civilisations through their simplification and solidification into the various alphabets back to a new online iconography.

This also demonstrates the strong Western bias of this technology, of course: had computers emerged from Chinese or Japanese culture, for example -- where alphabets in the literal sense don't exist -- chances are they would never have existed in a text-only form. Now that we have passed the alphabetic stage to re-enter an era of iconography, then, it remains to be seen how this change along with our overall "'immersion' in hypertext will affect the way that we mentally structure our world. Linear argumentation is more a consequence of alphabetic writing than of printed books and it remains to be seen if hypertext presentation will significantly erode this predominant convention for mentally ordering our world" (McKnight et al. 41).

Perhaps the computer game experience (where a blending of text and graphics had begun some time before the Web) can provide some early pointers already, then. The game-like nature of information search and usage online might help to undermine some of the more heavily encrusted structures of information dissemination that are still dominant: "we are promised, on the information 'library' side, less of the dogmatic and more of the ludic, less of the canonical and more of the festive. Fewer arguments from authority, through more juxtaposition of authorities" (Debray 146). This is also supported by the fact that there usually exists no one central authority, no one central site, in any field of information covered by the Web, but that there rather is a multiplicity of sources and viewpoints with varying claims to 'authority' and 'objectivity'; rather than rely on authorities to determine what is accepted knowledge, Web users must, and do, distil their own knowledge from the information they find in their searches. Kumon and Aizu's notion that from the industrial-age "wealth game" we have now moved into the "wisdom game" (320) sums up this view. However, for all the ludic exuberance of this game, we should also be concerned that, as in any game, we are also likely to see winners and losers. Those unaware of the rules of the game, and people who are prevented from playing for personal or socioeconomic reasons (the increased use of graphics will make it much more difficult for certain disabled readers to use the Web, for example) must not be left out of it. In gaming terminology, perhaps the formation of teams including such disadvantaged people is the answer?