what's love got to do with it? 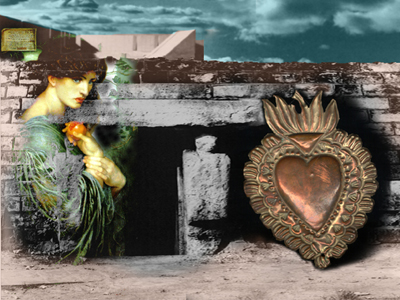 This paper addresses that natural consort of love: sex. It particularly considers the absence of actual sex from mainstream popular culture and the marginalisation of 'fun' sex as porn, requiring its illicit circulation as ‘illegitimate’ videos. The absence of sex from films classified and screened in public venues (even to over-18s) prevents a discourse about actual sex informing the discourse of love and romance perpetuated through Hollywood movies. The value of a variety of representations of sexual practice in the context of a discussion of love, sex and romance in Western cinema was briefly illuminated for the few days that Baise-moi was legitimately screened in Australia.

For all that love is one of the great universal themes, Western cinema tends to communicate this ‘finer feeling’ through recourse to romance narratives. Which is not to say that romantic representations of love are devoid of sex, just that that the cinematic convention is to indicate sex, without showing it. Indeed, without the actors 'doing it'. The peculiarity of this situation is not usually clear, however, because there is so little mainstream sex-cinema with which to compare the anodyne gyrations of romantic Hollywood. Which was where Baise-moi came in, briefly.

Baise-moi is variously translated for English-speaking cinema audiences as 'Fuck me' (in Australia) and 'Rape me' (in the US, where, astonishingly, Rape me is seen as a less objectionable title than Fuck me.) Of the two titles, Fuck me is by far the cleverer and more authentically related to the meaning and content, whereas Rape me is a travesty, particularly given the shocking power of an extremely graphic and violent rape scene which initiates much of the succeeding violence.

An early appeal by the Australian Attorney-General (to the Review Board) against the Office of Film and Literature Classification’s granting of an R rating meant that Baise-moi was hastily removed from Australian cinemas. The movie is, however, heavily reviewed on the web and readers are referred to commentaries such as those by Gary Morris and Frank Vigorito. The grounds on which Classification was refused were given as ‘strong depictions of violence’, ‘sexual violence’, ‘frequent, actual detailed sex scenes’ and ‘scenes which demean both women and men’. Violence, sexual violence and ‘scenes which demean’ are hardly uncommon in films (although it may be unusual that these demean even-handedly).

If the amount of violence is nothing new, the sex was certainly different from the usual cinematic fare. Although this was not the first time that ‘unsimulated’ sex had been shown on the art-house big screen, the other major examples were not entirely similar. Romance was wordy, arguably feminist, and a long way from mindless sex-because-they-like-it. Intimacy 's ‘sex scenes are explicit but totally non pornographic, they’re painful, needy, unsatisfying except on an orgasmic level’, according to Margaret Pomeranz, who reviewed the film for SBS. Baise-moi is different because, as Vigorito says, ‘please make no mistake that the two main characters in this film, the so-called French Thelma and Louise, certainly do want to fuck’. (They also like to kill.)

The popular culture approach to romance, love and sex moves comparatively smoothly from the first kiss to the rumpled sheets. Although the plot of a romantic film may consist in keeping the love and sex activities apart, the love is (almost invariably) requited. And, as films such as Notting Hill demonstrate, true love these days is communicated less frequently through the willingness of a couple to have sex (which generally goes without saying), and more often through commitment to the having and rearing of a shared child (whereas off-screen this may more usually be the commitment of a shared mortgage). Sex, in short, is popularly positioned as a precursor to love; as not entirely necessary (and certainly not sufficient) but very usually associated with the state of 'being in love'.

It is comparatively rare to see any hesitation to engage in sex on the part of a film-portrayed loving couple, other than hurdles introduced through the intervention of outside forces. A rare example of thinking and talking before fucking is The Other Sister , but this means it rates as an R in the States because of ‘thematic elements involving sex-related material’. In contrast, the film Notting Hill, where the characters played by Julia Roberts and Hugh Grant hardly pause for breath once attraction is established, rates a PG-13 (‘for sexual content and brief strong language’). Thus it is all right for producers to have sex in a storyline, but any hesitation, or discussion, makes the film unsuited to younger audiences.

Given that characters’ thinking about sex, and talking about sex, as part of (or preliminary to) having sex apparently increases the age at which the audience is allowed to see the film, perhaps it should not be surprising that actually showing sex about which the audience can then think and talk is almost entirely banned. Yet for a culture that associates sex so strongly with love, and celebrates love so thoroughly in film, television and literature (not to mention popular magazines such as Woman's Day, New Idea, New Weekly and Who), to be occasionally challenged by a film that includes actual sex acts seems not unreasonable, particularly when restricted to audiences of consenting adults.

Ian McEwan's debut collection of short stories, First love, last rites explores this conundrum of 'the sex that shall only be acted, never performed' in a short story, 'Cocker at the theatre' (McEwan 57). The tale is about a theatrical production where the actors are new, and nude, and the theme of the play is copulation. It is a story of its time, mid-seventies, the resonating-hippie Age of Aquarius, when Hair still rocked. McEwan's naked couples are assembled by the play's director and then pressed together to begin the rhythmic moves required to complement the thumping musical score of GTC: ‘Grand Time Copulation’. The male and female actors are not near enough to each other, so they are spliced closer together: ‘When they began to move again their pubic hair rasped’ (57-8). The director is unimpressed by the result: ‘I know it's hard, but you have to look as if you're enjoying this thing.' (His voice rose.) 'Some people do, you know. It's a fuck, you understand, not a funeral.' (His voice sank.) 'Let's have it again, with some enthusiasm this time.' However, all is not entirely well, after a good second beginning. ‘Them on the end, they're going too fast, what do you think?' [says the director to the stage manager] They watched together. It was true, the two who had been moving well, they were a little out of time ... 'My God,' said [the director] 'They're fucking … It's disgusting and obscene … pull them apart.' (58-9).

The issue raised here, as in the case of the removal of any classification from Baise-moi that effectively prevented further public screenings, is the double standard of a society that expends so much of its critical and cultural energies in exploring the nature of love, romance and sexual attraction but balks (horrified) at the representation of actual sex. Yet one of the values of a cinematic replay of 'unsimulated sex' is that it acts as a ‘reality check’ for all the mushy renditions of romance that form the mainstream representation of 'love' on-screen.

It is hard to know what Baise-moi might have said to Australian audiences about the relationship between sex, authenticity (Morris uses the term ‘trashy integrity’) and popular culture since the film was screened for only the briefest of intervals, and throughout that time the ‘hype’ surrounding it distracted audiences from any discussion other than would it/wouldn't it, and should it/shouldn't it, be banned. Hopefully, a future Attorney-General will allow the adults in this country to enjoy the same range of popular cultural inputs available to citizens in more liberal nations, and back the initial (liberal) decision of the OFLC.

And what has love got to do with all this? Not much it seems, although doesn't popular culture ‘teach’ that one of the main uses for a love theme is to provide an excuse for some gratuitous sex? Perhaps, after all, it is time to cut to the chase and allow sex to be screened as a popular culture genre in its own right, without needing the excuse of a gratuitous love story.