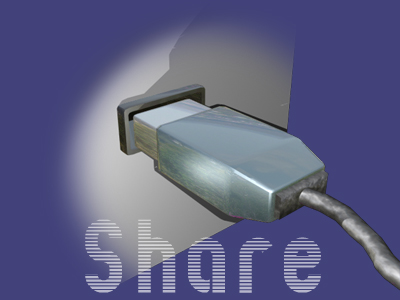 Does the arrival of the network society mean we are now a culture of collectors, a society of sharers? We mused about these questions while assembling this M/C Journal issue, which has its genesis in a past event of ‘shared’ confusion. Alex Burns booked into Axel Bruns’s hotel room at the 1998 National Young Writer’s Festival (NYWF) in Newcastle. This ‘identity theft’ soon extended to discussion panels and sessions, where some audience members wondered if the NYWF program had typographical errors.

We planned, over café latte at Haddon’s Café, to do a co-session at next year’s festival. By then the ‘identity theft’ had spread to online media. We both shared some common interests: the music of Robert Fripp and King Crimson, underground electronica and experimental turntablism, the Internet sites Slashdot and MediaChannel.org, and the creative possibilities of Open Publishing. “If you’re going to use a pseudonym,” a prominent publisher wrote to Alex Burns in 2001, “you could have created a better one than Axel Bruns.”

We haven’t yet done our doppelgänger double-act at NYWF but this online collaboration is a beginning. What became clear during the editorial process was that some people and communities were better at sharing than others. Is sharing the answer or the problem: does it open new possibilities for a better, fairer future, or does it destroy existing structures to leave nothing but an uncontrollable mess?

The feature article by Graham Meikle elaborates on several themes explored in his insightful book Future Active: Media Activism and the Internet (New York: Routledge, London: Pluto Press, 2002). Meikle’s study of the influential IndyMedia network dissects three ‘compelling founder’s stories’: the Sydney-based Active software team, the tradition of alternative media, and the frenetic energy of ‘DiY culture’. Meikle remarks that each of these ur-myths “highlights an emphasis on access and participation; each stresses new avenues and methods for new people to create news; each shifts the boundary of who gets to speak.” As the IndyMedia movement goes truly global, its autonomous teams are confronting how to be an international brand for Open Publishing, underpinned by a viable Open Source platform.

IndyMedia’s encounter with the Founder’s Trap may have its roots in paradigms of intellectual property. What drives Open Source platforms like IndyMedia and Linux, Tom Graves proposes, are collaborative synergies and ‘win-win’ outcomes on a vast and unpredictable scale. Graves outlines how projects like Lawrence Lessig’s Creative Commons and the Free Software Foundation’s ‘GNU Public License’ challenge the Western paradigm of property rights. He believes that Open Source platforms are “a more equitable and sustainable means to manage the tangible and intangible resources of this world we share.”

The ‘clash’ between the Western paradigm of property rights and emerging Open Source platforms became manifest in the 1990s through a series of file-sharing wars. Andy Deck surveys how the ‘browser war’ between Microsoft and Netscape escalated into a long-running Department of Justice anti-trust lawsuit. The Motion Picture Association of America targeted DVD hackers, Napster’s attempt to make the ‘Digital Jukebox in the Sky’ a reality was soon derailed by malicious lawsuits, and Time-Warner CEO Gerald Levin depicted pre-merger broadband as ‘the final battleground’ for global media. Whilst Linux and Mozilla hold out promise for a more altruistic future, Deck contemplates, with a reference to George Orwell’s Homage to Catalonia (1938), that Internet producers “must conform to the distribution technologies and content formats favoured by the entertainment and marketing sectors, or else resign themselves to occupying the margins of media activity.”

File-sharing, as an innovative way of sharing access to new media, has had social repercussions. Marjorie Kibby reports that “global music sales fell from $41.5 billion in 1995 to $38.5 billion in 1999.” Peer-to-Peer networks like KaZaA, Grokster and Morpheus have surged in consumer popularity while commercial music file subscription services have largely fallen by the wayside. File-sharing has forever changed the norms of music consumption, Kibby argues: it offers consumers “cheap or free, flexibility of formats, immediacy, breadth of choice, connections with artists and other fans, and access to related commodities.”

The fragmentation of Australian families into new diversities has co-evolved with the proliferation of digital media. Donell Holloway suggests that the arrival of pay television in Australia has resurrected the ‘house and hearth’ tradition of 1940s radio broadcasts. Internet-based media and games shifted the access of media to individual bedrooms, and changed their spatial and temporal natures. However pay television’s artificial limit of one television set per household reinstated the living room as a family space. It remains to be seen whether or not this ‘bounded’ control will revive family battles, dominance hierarchies and power games.

This issue closes with a series of reflections on how the September 11 terrorist attacks transfixed our collective gaze: the ‘sharing’ of media connects to shared responses to media coverage. For Tara Brabazon the intrusive media coverage of September 11 had its precursor in how Great Britain’s media documented the Welsh mining disaster at Aberfan on 20 October 1966. “In the stark grey iconography of September 11,” Brabazon writes, “there was an odd photocopy of Aberfan, but in the negative.” By capturing the death and grief at Aberfan, Brabazon observes, the cameras mounted a scathing critique of industrialisation and the searing legacy of preventable accidents. This verité coverage forces the audience to actively engage with the trauma unfolding on the television screen, and to connect with their own emotions. Or at least that was the promise never explored, because the “Welsh working class community seemed out of time and space in 1960s Britain,” and because political pundits quickly harnessed the disaster for their own electioneering purposes.

In the early 1990s a series of ‘humanitarian’ interventions and televised conflicts popularized the ‘CNN Effect’ in media studies circles as a model of how captivated audiences and global media vectors could influence government policies. However the U.S. Government, echoing the coverage of Aberfan, used the ‘CNN Effect’ for counterintelligence and consensus-making purposes. Alex Burns reviews three books on how media coverage of the September 11 carnage re-mapped our ‘virtual geographies’ with disturbing consequences, and how editors and news values were instrumental in this process. U.S. President George W. Bush’s post-September 11 speeches used ‘shared’ meanings and symbols, news values morphed into the language of strategic geography, and risk reportage obliterated the ideal of journalistic objectivity. The deployment of ‘embedded’ journalists during the Second Gulf War (March-April 2003) is the latest development of this unfolding trend.

September 11 imagery also revitalized the Holocaust aesthetic and portrayal of J.G. Ballard-style ‘institutionalised disaster areas’. Royce Smith examines why, in the aftermath of the terrorist attacks, macabre photo-manipulations of the last moments became the latest Internet urban legend. Drawing upon the theoretical contributions of Jean Baudrillard, Roland Barthes and others, Smith suggests that these photo-manipulations were a kitsch form of post-traumatic visualisation for some viewers. Others seized on Associated Press wire photos, whose visuals suggested the ‘face of Satan’ in the smoke of the World Trade Center (WTC) ruins, as moral explanations of disruptive events. Imagery of people jumping from the WTC’s North Tower, mostly censored in North America’s press, restored the humanness of the catastrophe and the reality of the viewer’s own mortality. The discovery of surviving artwork in the WTC ruins, notably Rodin’s The Thinker and Fritz Koenig’s The Sphere, have prompted art scholars to resurrect this ‘dead art’ as a memorial to September 11’s victims.

Perhaps art has always best outlined the contradictions that are inherent in the sharing of cultural artefacts. Art is part of our, of humanity’s, shared cultural heritage, and is celebrated as speaking to the most fundamental of human qualities, connecting us regardless of the markers of individual identity that may divide us – yet art is also itself dividing us along lines of skill and talent, on the side of art production, and of tastes and interests, on the side of art consumption. Though perhaps intending to share the artist’s vision, some art also commands exorbitant sums of money which buy the privilege of not having to share that vision with others, or (in the case of museums and galleries) to set the parameters – and entry fees – for that sharing.

Digital networks have long been promoted as providing the environment for unlimited sharing of art and other content, and for shared, collaborative approaches to the production of that content. It is no surprise that the Internet features prominently in almost all of the articles in this ‘share’ issue of M/C Journal. It has disrupted the existing systems of exchange, but how the pieces will fall remains to be seen. For now, we share with you these reports from the many nodes of the network society – no doubt, more connections will continue to emerge.