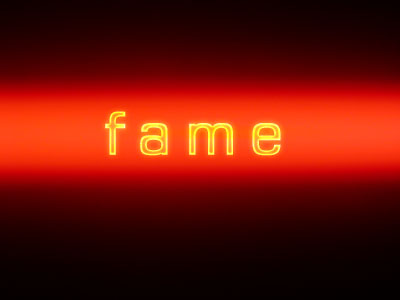 There was a moment just after September 11, 2001, that many commentators heralded the end of our celebrity obsessions and the emergence of a new sobriety in politics and culture. We had the mediated version of atonement when the famous presented their most serious sides for television specials in support of the families of the victims of the September 11 attacks. But within a matter of weeks the celebrity industry was back on its old track – salacious rumors about J-Lo and her movement through the entertainment industry A-List, further debates about the propriety of Michael Jackson’s behaviour, Demi Moore’s new love interest Ashton Kutcher – who is and was young enough to be her son and so on. The machine and industry that had been in place tested whether it could continue its dance with public intimacy and private turmoils of the rich and famed.

Fame is both fickle and incredibly enduring. It relies on a public individual’s connection to an audience and how that persona can embody some form of affective investment (Marshall, Celebrity and Power). Audience’s loyalty can migrate, but the machinery of fame can produce new variations for newly minted moments of affection or even its opposite, intense dislike. What is enduring is the process. There is the manufacture of celebrities and stars that were produced with regularity by the old movie studios in the first half of the twentieth century that are now produced with astonishing levels of success through the current array of reality/game shows via television. Beyond these public variations, there is the will-to-fame that is expressed by the various webcam sites and weblogs where a new era of public narcissism is mutating with new media forms.

This issue deals with fame; but it is not alone. The academy has embraced the study of celebrity and fame over the last decade and it has accelerated in recent years. Sport stardom (Andrews and Jackson), film stardom (Austin and Barker), literary celebrity (Moran; Glass), journalism and celebrity (Ponce de Leon; Marshall, “Intimately Intertwined”), the psychology of fame (Giles), and media and the celebrity (Turner; Marshall, Celebrity and Power) have appeared as full-fledged books with the regularity that echoes the celebrity system’s own production process. This burgeoning interest in fame cuts across disciplinary study in surprising ways. Chris Rojek’s discussion of religion and celebrity is but one interesting recent variation in the study of fame (Rojek).

The interest in this issue has been impressive and, for an editor, at times overwhelming. Nonetheless, we have collected an intriguing array of articles to advance the study of fame and to engage with the way it reflects and refracts the complex crystalline structure of popular culture. Understanding fame demands a form of perceptive interdisciplinarity that our group of 18 authors has worked to achieve.

Gerard Goggin and Christopher Newell’s article on how Christopher Reeve’s fame has transformed and disciplined international debates on disability to narrowly focus on the agenda of the “cure” serves as our feature article. The article paints a fascinating picture on the reconstruction of this particular dimension of the public sphere via the agency of a persona. Goggin and Newell’s writing is particularly valuable to understand the legacy of Reeve since his recent death and how it will continue to shape the concepts of disability for years if not decades to come.

Dealing with Ziggy Stardust, the contrived fictional star that Bowie incarnated in the early 1970s, allows Suzanne Rintoul to work through how celebrity and fame provide a discursive narrative that can be the source for performance of the public self. Bowie plays with ironic distance that is understood as a debate about authenticity in a way that is implicitly understood as a trope of contemporary popular culture and the audience’s understanding of popular figures.

William Tregonning explains that authenticity remains a central feature of how the famed – in popular music at the very least – refer to their identities. Via Britney Spears, Jennifer Lopez and Christine Aguilera, the author weaves a reading of their moments of their publicly reported self-reflection that entreats their audiences to understand their desire to be seen as real and identical to their pre-famous identities despite/because of their heavily hyped and inauthentic pop presence.

Jonathan Goldman’s reading of Charlie Chaplin provides one of the more fascinating intertextual readings of how the famed persona can be used and turned back towards the production of the film narrative and how it can be read by audiences. Goldman deftly reads the closing image of the film Modern Times as an epigraph that identifies how the extratextual of celebrity and persona flow back into informing the reading of an actor’s work. And all of this “work” is done quite consciously by Chaplin as his own persona – his “trademark” as tramp – can work as a powerful shorthand for his films.

Gordon Fletcher provides an entry point to determine the extent and reach of fame through a study of the frequency with which different public figures’ names are used in Internet searches. Fletcher’s work presents “an index of fame” as these particular personalities intersect with the promotional culture’s intentions via releases and with specific events that have clear connections to public individuals. The Web serves as a way to map these cultural trends in a manner that was more difficult to undertake in the past.

Reality television internationally has produced famous people with astounding regularity and three of our authors have tried to address the way in which television practices have articulated fame and celebritydom. Su Holmes’s inspection of reality television programmes explicates that the production of the celebrity is revealed as much as traditional notions of earning one’s acclaim through talent, hard work and understanding the industry.

Tom Mole’s “hypertrophic celebrity” refers to the way that the entertainment industry via reality television has engaged in many more ways of promoting and cross-promoting individuals through a variety of technologies and “intertextual networks”. Ultimately, it is the formats that have been more successful and sustained than any individual star that is created and quickly disappears. Mole indicates that observing this element of celebrity culture reveals a great deal about the new machinations of sophistication of the entertainment industry.

Douglas Fairchild’s study of Australian Idol dovetails into Mole’s insights. One of the lacunae of research in popular music, according to Fairchild, is the operation of public relations in musical cultural production. Fairchild draws on research that discusses how the “attention economy” wraps around contemporary cultural production through the techniques of publicity and public relations to deepen their significance and play in popular culture. The decline in recorded music – or its change to downloading – has demanded a refocusing of an industry to make particular individuals as entertainment stars that move between the media of television and music (and other cultural forms and venues if possible) and thereby produce a strong divertissement for the attention economy.

Fame and infamy blur in David Schmid’s study of the collection of serial killer memorabilia online. Collectors are condemned for their fascination, but contemporary culture’s relationship to the fetish objects of infamy demands a more careful reading. Schmid relates the fascination with how central serial killers are to the celebrity system and “America” and become prominent idols for consumption – to paraphrase Leo Lowenthal.

In three of our articles, artistic practices are investigated but from quite different perspectives. It seems almost de rigeur to have some mention of Andy Warhol in an issue devoted to fame. Michael Angelo Tata’s work moves laterally (which is always appropriate for Warhol…) along the surface of Warhol to debate his ruminations of the fabrication of the self through his fascination and play with the world of modeling.

Carrie LeBlanc’s analysis of the British celebrity-artist Damien Hirst attempts to tread the line between the value of the artist persona to the meaning of artistic practice and what we could now call – thanks to Fairchild’s article in this issue – the ‘attention economy’ that circulates around the meaning of the artist and art work. Celebrity is integral to the interpretation of Hirst and his working class persona is integral to his play in British media as much as the meaning of his shock-art.

The Harry Potter phenomenon has produced a number of famed individuals, from its author to the actors associated with the three principal roles; but this fame presents an elaborate textual field that becomes the territory of fan fiction. Lelia Green and Carmen Guinery investigate the permutations of fame that envelope fan fiction and provide one of the motivations for fan fiction authors and the expansion of their influence among fan groups.

Fame is a kind of moving signification system that draws on popular culture fragments and elements to buttress the centrality of its various personalities. Mohmin Rahman has posited that David Beckham’s fame in both photos in magazines and in descriptions of his body rely knowingly on queer iconography but only as a surface meaning system. Ultimately, Beckham after playing with the codes of queer must reassert the bedrock of his identity through heterosexuality; nonetheless, Rahman identifies the uses made of queer representations in displaying the male sporting hero in the most coded way.

The last two articles deal with the politics of fame and its projections on to obvious personas. Paul Allatson writes a wonderful review of the existent but non-existent Elián Gonzalez and how the virtual Elián is deployed as a persona for all sorts of positions in the United States and Cuba for specific political ends. As much as Elián was converted and passed between countries, the virtual Elián becomes a vessel for the construction of a variety of political postures that can be framed in national desires and ethnic ambitions.

Kevin Howley, drawing insights from the remarkable reincarnation of the legacy of Reagan through his death and funeral, provides an outline of how the myth of the famed president is maintained and actively fostered by a variety of groups. Embedded in the production of Reagan in death is his originary filmic persona, transplanted into the Teflon presidency and finally into a conservative politics of the future of the right.

This collection on the concept of fame provides an intellectual gestalt of the some of the tropes that circulate around the production of public personalities. The ephemeral nature of fame means that it can be attached to and detached from individuals relatively easily. Fame is surface meaning that may correlate with deeper issues and more profound essences, but fundamentally fame is designed to be a play on the surface and to allow that surface pattern to circulate widely across a culture or, on occasion, transculturally. Fame moves readily and easily between the domains of the public and the private for public consumption. Reading the production of fame is a reading of popular culture itself as it is reproduced and expanded via its various forms of mediation. In this issue of M/C Journal, we can see the dispositifs of how public identities – the material instances of fame production – refract publics and popular desires.

Dig into the various narratives of fame that these 16 articles present – they are both intellectually challenging and – in the wonderful tradition of M/C Journal – great reads as well.