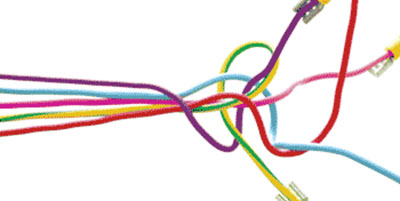 To say something is complex can often be conclusive. It can mean that an issue or an idea is too difficult to explain or understand, or has too many aspects to examine clearly. In many ways the designation “complex” can be an abdication, an end to an argument or discussion. An epochal change in thinking about complexity dates from post structuralist challenges to the idea that the world was known by arguing that everything was indeed much more complex than master narratives would suggest. In the last decade a social scientific engagement with complexity theory has meant that social and cultural meanings of “complex” and “complexity” are being explored.

“Complex” has also made a renaissance within the popular and everyday imagination. Reference to “complex” and “complexity” can be found in advertising campaigns for Sydney City Rail (Figure 1), as well as advertising for a telecommunication company (Figure 2).

In our feature article Bob Hodge provides a detailed analysis of Sydney City Rail’s “Rail Clearways” advertising campaign. In a comparable campaign, a telecommunications company claims “Simplicity trumps Complexity”. It seems that advertisers will call any networking system “complex” because its binary is “simple”, from the Latin simplex. Simple versus Complex creates a nice image of a telecommunication company possessing a SIMPLE solution for any COMPLEX networking system. “Simplicity trumps Complexity” denotes a competition between the two meanings and a “simple” solution for “complex” networking needs can be found within this company’s product portfolio. Rather than position “complex” in competition with “simple”, we wanted to explore the possibilities of “complex”. The idea of “complex” as a beginning, not a conclusion, has been the driving concept behind this journal edition.

This M/C Journal edition assembles seemingly disparate interpretations of “complex”. We did not want to reduce a journal edition on “complex” into “simple” neat links. Instead, we have grouped the articles together under four titles: “‘Complex’ and Affect: Complexities in the Concept of Love”, “Situating ‘Complex’ within Fixed Social and Cultural Systems”, “Positioning ‘Complex’ in Cultural Theories” and “Locating ‘Complex’ in Design”. This thematic arrangement demonstrates how each interpretation of “complex” forms assemblages and from this other assemblages can be formed. Such an approach reveals the way in which “complex” entities emerge from “complex” processes.

Our feature article, “The Complexity Revolution”, outlines and categorises complex(ity) in its varying forms. Bob Hodge positions complex(ity) in popular culture, science and humanities. Complex(ity)’s popular meaning reduces the concept to something that is intricate, involved, complicated or multi-dimensional. In a more negative sense complex(ity) is often stripped to simplicity. This article decodes Sydney City Rail’s “Rail Clearways” publicity campaign “untangling our complex rail network” to illustrate how complex(ity) is not reducible to simplicity, it is not strictly a positive or a negative but encompasses many meanings located with popular culture, science and humanities.

“Complex” and Affect: Complexities in the Concept of Love

“The Heart of the Matter” positions romantic love as productive force and explores the complexity that lies within the notions of love and desire. Richard Carpenter examines why romantic love is so complex by exploring its development from a romantic ideal to encorporating notions of desire. Carpenter explores the move from love as fusion, encapsulated by the movie Jerry Maguire (“you complete me”), to Anthony Gidden’s “plastic sexuality” where desire is detached from reproductive imperatives. It is not that we have moved past romantic love, Carpenter argues, but that we should explore the complex range of possibilities created by its productive force.

Adding to this exploration of love’s complexities, Glen Fuller uses the film Punch Drunk Love to illustrate the contingent nature of contemporary romance. Inspired by a conversation with a woman who claims “everyone does rsvp” this paper probes the very notion of love by relating the experiences of the film’s lead characters, Barry and Lisa, to theories by Badio and Deleuze. The continual striving for an elusive harmony is presented as the materiality of love; reconciling love’s contradictions by suggesting it is the problematic nature of romance that elicits the “wonder at the heart of love”.

Mario Lopez’s article explores contemporary Japanese-Philippine relations through an ethnographic study in Japan on marriages between Japanese men and Filipino women. In this article, he focuses on one aspect of his research: Filipino women attending a ‘care-giver’ course and the outcomes. Japan’s aging society and a shortage of labour in Health Care Facilities has sparked an effort by the Japanese State to source and educate Filipino women to fill the labour void. “Bride to Care Worker” outlines how Filipino women are located within a complex system of nation-state relations.

It has become common to claim that we live within a culture of fear and a by-product of this is increased surveillance technologies. “Commodifying Terrorism” explores London’s Metropolitan Police use of Closed Circuit Television (CCTV) cameras to monitor and control public spaces. Yasmin Ibrahim examines how surveillance systems like CCTV locate the body and its everyday actions as stored data in an effort to “combat” terrorism and make public spaces “safer”. The ramifications are that it constructs and supports new power relationships and new risk hierarchies; raising questions of how surveillance technologies are making us safer.

In “Decisions on Fire” Valerie Ingham asserts one thought process or model cannot encompass the complex decisions made on the fire-ground. Ingham argues incident commanders use “Multimodal Decision Making” a term that she developed from her ethnographic research with fire-fighters. “Multimodal Decision Making” illustrates how sensorial awareness and experiential knowledge is used when assessing and recommending a course of action to fight fires.

Sarah James examines one mural, from one street in San Francisco’s, predominantly Mexican, Mission District. She assesses how it is symbolic of complex assemblages denoting a diasporic community, post colonial histories and cultural hybridity. “Culture and Complexity: Graffiti on a San Francisco Streetscape” argues complexity theories can extend and contribute to established concepts in humanities such as post colonialism and cultural hybridity.

Karen Cham and Jeffrey Johnson argue that complex systems are cultural systems. They trace the developments within interactive digital media and industry design practice to illustrate the relationship between art and complex systems. This relationship is epitomised by the possibilities inherent within interactive media for experimentation and innovation. Drawing on post-structural, science and art theory, Cham and Johnson suggest that digital mediums serve as a model that highlights the nature of complex adaptive systems.

A labyrinth epitomises complexity in design with its numerous choices of pathways and directions. In “A Vision of Complex Symmetry”, Ilana Shiloh applies a complexity perspective to the Coen Brothers’ neo-noir film The Man Who Wasn’t There (2001) by arguing its symbolic relationship to a labyrinth. Shiloh uses the labyrinth as a metaphor to highlight the difference between rationalistic genre in detective fiction in which complexity is simplified by the work of the detective to film noir in which the audience is taken deeper into the labyrinthine maze of a story where little makes sense and nothing is what it seems.

Vince Dziekan’s curatorial project during his recent “Remote” exhibition inspired his interactive piece for our journal edition. In his paper Dziekan’s explores the creative process behind curatorship, presenting it as a design process which adds levels of complexity to the experience of the gallery space. By creating an interactive element to his work, Dziekan’s draws the reader into the experience of curatorial design, using layers of black, magenta, cyan and yellow. Each colour represents an aspect of design: the ‘black’ layer is a synopsis of curatorial design and complexity, the article is situated within the four magenta layers, the cyan layer provides a visual experience of the exhibition and the yellow layer embodies Marcel Duchamp’s “Mile of String”. Dziekan’s work is symbolic of “complex” representing layers of concepts each interacting, reflecting and affecting the other.

Through these papers this journal edition presents an exploration of the idea of “complex”. A complex “revolution” (in a quiet way) infuses the vast range of topics by adding depth to challenge all types of research. This journal, in keeping with the idea of complex, illustrates the possibilities from which to start/continue in an effort to expand rather than limit the possibilities of further explorations of “complex”.