How the Mainstream Media Help to Spread Disinformation about Covid-19 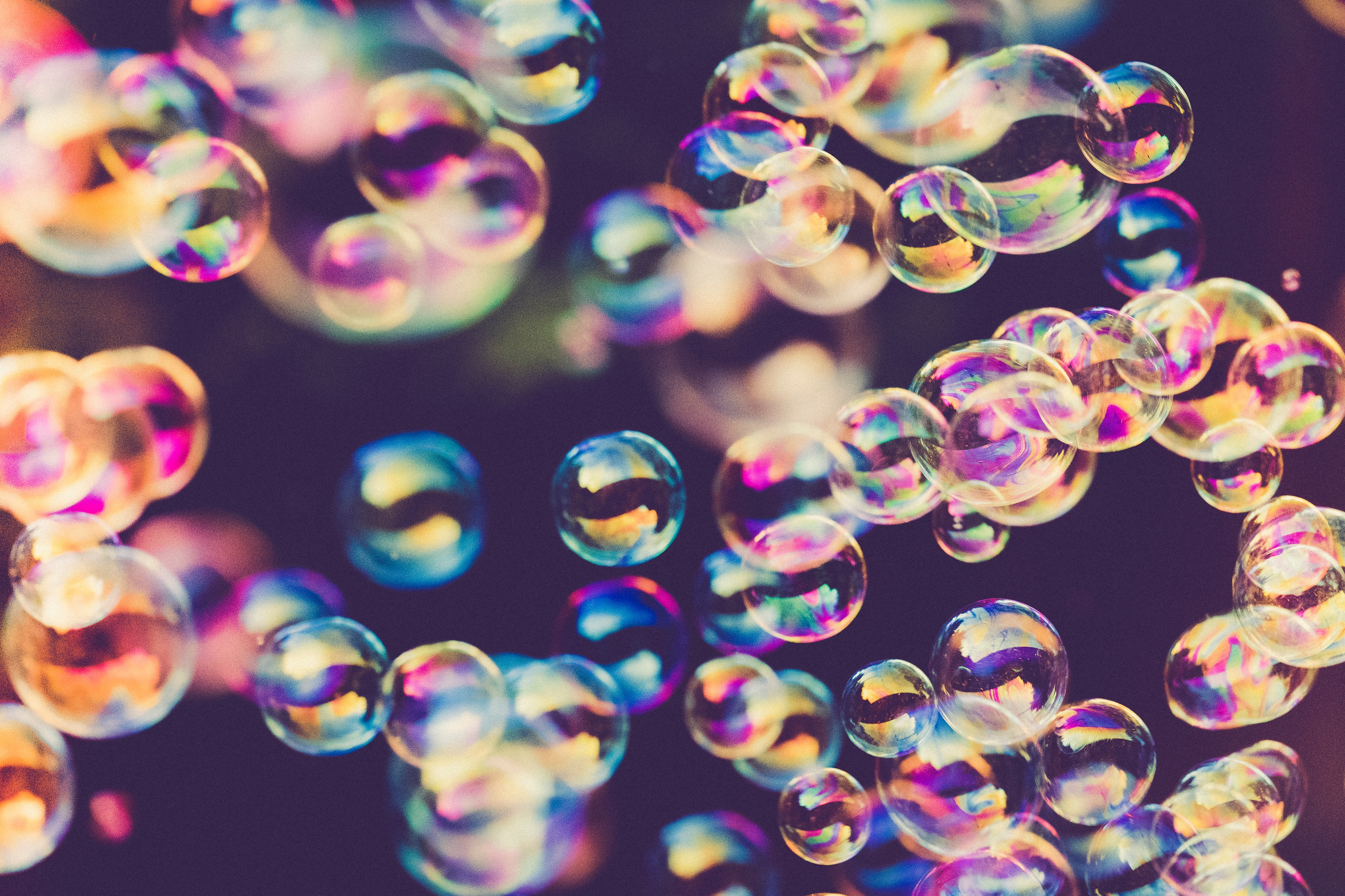 In this article, we hypothesise how mainstream media coverage can promote the spread of disinformation about Covid-19. Mainstream media are often discussed as opposed to disinformation (Glasser; Benkler et al.). While the disinformation phenomenon is related to the intentional production and spread of misleading and false information to influence public opinion (Fallis; Benkler et al.), mainstream media news is expected to be based on facts and investigation and focussed on values such as authenticity, accountability, and autonomy (Hayes et al.). However, journalists might contribute to the spread of disinformation when they skip some stage of information processing and reproduce false or misleading information (Himma-Kadakas). Besides, even when the purpose of the news is to correct disinformation, media coverage might contribute to its dissemination by amplifying it (Tsfati et al.). This could be particularly problematic in the context of social media, as users often just read headlines while scrolling through their timelines (Newman et al.; Ofcom). Thus, some users might share news from the mainstream media to legitimate disinformation about Covid-19. The pandemic creates a delicate context, as journalists are often pressured to produce more information and, therefore, are more susceptible to errors.

As a case study, we look at the Brazilian disinformation context on Covid-19. The discussion about the disease in the country has been highly polarised and politically framed, often with government agents and scientists disputing the truth about facts on the disease (Araújo and Oliveira; Recuero and Soares; Recuero et al.). Particularly, the social media ecosystem seems to play an important role in these disputes, as Brazilian President Jair Bolsonaro and his supporters use it as a key channel to spread disinformation about the virus (Lisboa et al.; Soares et al.). We use data from public groups on Facebook collected through CrowdTangle and a combination of social network analysis and content analysis to analyse the spread and the content of URLs and posts.

Disinformation has been central to the Covid-19 “infodemic”, created by the overabundance of information about the pandemic, which makes it hard for people to find reliable guidance and exacerbates the outbreak (Tangcharoensathien et al.). We consider disinformation as distorted, manipulated, or false information intentionally created to mislead someone (Fallis; Benkler et al.). Disinformation is often used to strengthen radical political ideologies (Benkler et al.).

The polarised discussions are often associated with the idea of “bubbles”, as the different political groups tend to share and legitimate only discourses that are aligned with the group's ideological views. Consequently, these groups might turn into ideological bubbles (Pariser). In these cases, content shared within one group is not shared within the other and vice versa. Pariser argues that users within the bubbles are exposed exclusively to content with which they tend to agree. However, research has shown that Pariser’s concept of bubbles has limitations (Bruns), as most social media users are exposed to a variety of sources of information (Guess et al.).

Nevertheless, polarisation might lead to different media diets and disinformation consumption (Benkler et al.). That is, users would have contact with different types of information, but they would choose to share certain content over others because of their political alignment (Bruns). Therefore, we understand that bubbles are created by the action of social media users who give preference to circulate (through retweets, likes, comments, or shares) content that supports their political views, including disinformation (Recuero et al.). Thus, bubbles are ephemeral structures (created by users’ actions in the context of a particular political discussion) with permeable boundaries (users are exposed to content from the outside) in discussions on social media.

We selected three case studies based on events that created both political debate and high media coverage in Brazil. We chose them based on the hypothesis that part of the mainstream media links could have produced headlines that support disinformation discourses, as the political debate was high. The events are:

Before we created our final dataset that includes links from the three events together, we explored the most shared URLs in each event. We used keywords to collect posts shared in the public groups monitored by CrowdTangle, a tool owned by Facebook that tracks publicly available posts on the platform. We collected posts in a timeframe of three days for each event to prevent the collection of links unrelated to the cases. We collected only posts containing URLs. Table 1 summarises the data collected.

From this original dataset, we selected the 60 most shared links from each period (n=180). We then filtered for those which sources were mainstream media outlets (n=74). We used content analysis (Krippendorff) to observe which of these URLs headlines could reinforce disinformation narratives (two independent coders, Krippendorff’s Alpha = 0.76). We focussed on headlines because when these links are shared on Facebook, often it is the headline that appears to other users. We considered that a headlined reinforced disinformation discourses only when it was flagged by both coders (n=21 – some examples are provided in Table 3 in the Results section). Table 2 provides a breakdown of this analysis.

As the number of posts that shared URLs with headlines that supported disinformation was low (n=395), we conducted another CrowdTangle search to create our final dataset. We used a sample of the links we classified to create a “balanced” dataset. Out of the 21 links with headlines that reinforced disinformation, we collected the 10 most shared in public groups monitored by CrowdTangle (this time, without any particular timeframe) (n=1346 posts). In addition, we created a “control group” with the 10 most shared links that neither of the coders considered could reinforce disinformation (n=1416 posts). The purpose of the “control group” was to identify which Facebook groups tend to share mainstream media links without headlines that reinforce disinformation narratives. Therefore, our final dataset comprises 20 links and 2762 posts.

We then used social network analysis (Wasserman and Faust) to map the spread of the 20 links. We created a bipartite network, in which nodes are (1) Facebook groups and (2) URLs; and edges represent when a post within a group includes a URL from our dataset. We applied a modularity metric (Blondel et al.) to identify clusters. The modularity metric allows us to identify “communities” that share the same or similar links in the network map. Thus, it helped us to identify if there was a “bubble” that only shares the links with headlines that support disinformation (H1).

To understand if the disinformation was supporting a larger narrative shared by the groups, we explored the political alignments of each cluster (H2). We used Textometrica (Lindgreen and Palm) to create word clouds with the most frequent words in the names of the cluster groups (at least five mentions) and their connections. Finally, we also analysed the posts that shared each of the 10 links with headlines that reinforced disinformation. This also helped us to identify how the mainstream media links could legitimate disinformation narratives (H2). Out of the 1346 posts, only 373 included some message (the other 973 posts only shared the link). We used content analysis to see if these posts reinforced the disinformation (two independent coders – Krippendorff’s Alpha = 0.723). There were disagreements in the categorisation of 27 posts. The two coders reviewed and discussed the classification of these posts to reach an agreement. 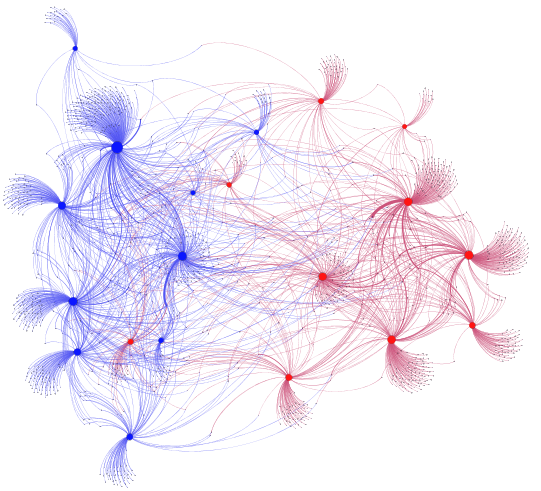 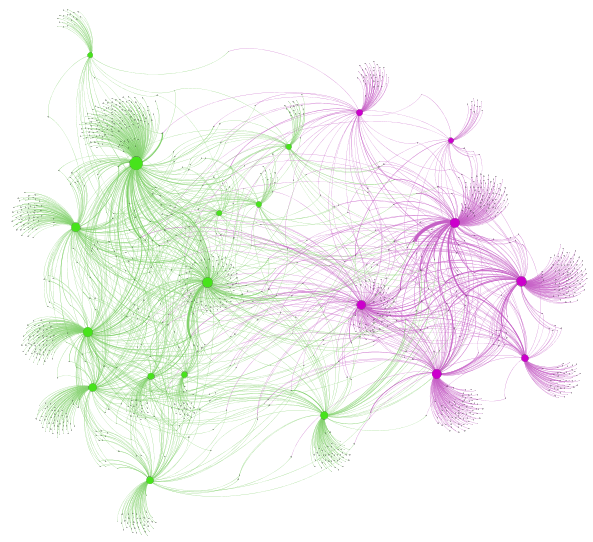 This result shows that users’ actions boost the creation of bubbles (Bakshy et al.), as they choose to share one type of content over the other. The mainstream media are the source of all the URLs we analysed. However, users from the purple cluster chose to share only links with headlines that supported disinformation discourses. This result is also related to the political framing of the discussions, as we explore below.

We used word clouds (Lindgreen and Palm) to analyse the Facebook groups’ names to explore the ideological affiliation of the bubbles. The purple bubble is strongly related to Bolsonaro and his discourse (Figure 3). Bolsonaro is the most frequent word. Other prevalent words are Brazil, patriots (both related to his nationalist discourse), right-wing, conservative, military (three words related to his conservative discourse and his support of the military dictatorship that ruled Brazil from 1964 to 1985), President, support, and Alliance [for Brazil] (the name of his party). Some of the most active groups within the purple bubble are “Alliance for Brazil”, “Bolsonaro 2022 [next presidential election]”, “Bolsonaro’s nation 2022”, and “I am right-wing with pride”. 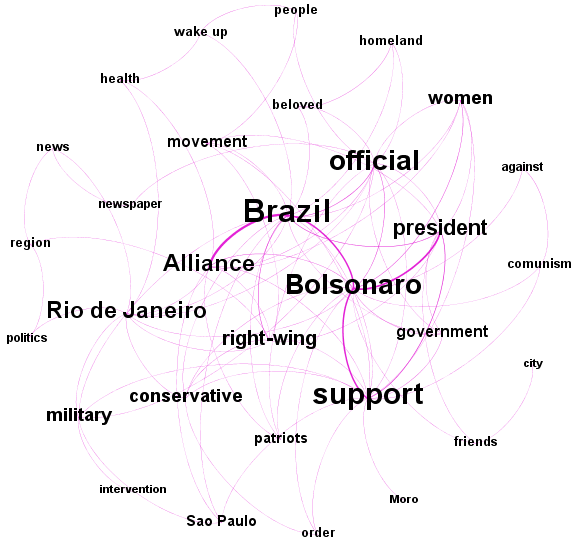 Bolsonaro is also a central word in the green cluster word cloud (Figure 4). However, it is connected to other words such as “against” and “out”, as many groups are anti-Bolsonaro. Furthermore, words such as left-wing, Workers’ Party (centre-left party), Lula and Dilma Rousseff (two Workers’ Party ex-presidents) show another ideological alignment in general. In addition, there are many local groups (related to locations such as Rio de Janeiro, São Paulo, Rio Grande do Sul, Minas Gerais, and others), and groups to share news (news, newspaper, radio, portal). “We are 70 per cent [anti-Bolsonaro movement]”, “Union of the Left”, “Lula president”, and “Anti-Bolsonaro” are some of the most active groups within the green cluster. 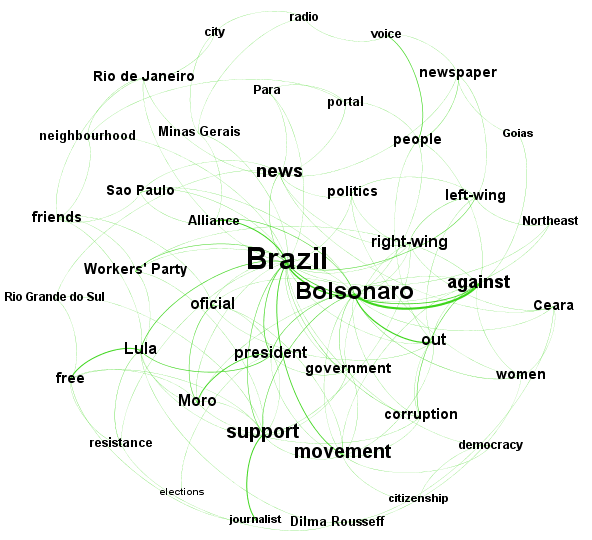 Then, we analysed how users shared the mainstream media links with headlines that support disinformation discourses. In total, we found that 81.8% of the messages in the posts that shared these links also reproduced disinformation narratives. The frequency was higher (86.2%) when considering only posts that shared one of the seven links from the purple cluster (based on the modularity metric). Consequently, it was lower (64%) in the messages that shared one of the other three links.

The messages often showed support for Bolsonaro; criticised other political and health authorities (the WHO, São Paulo Governor João Dória, and others), China, and the “leftists” (all opposition to Bolsonaro); claimed that quarantine and social distancing measures were unnecessary; and framed vaccines as dangerous. We provide some examples of headlines and posts in Table 3 (we selected the most-shared URL for each event to illustrate). This result supports H2 as we found that users shared mainstream media headlines that reinforce disinformation discourse to legitimate the disinformation narrative; and that it was more prevalent in the purple bubble.

Table 3: Examples of headlines and posts

This study has limitations. We analysed only a sample of links (n=20) based on three events in Brazil. Other events and other political contexts might result in different outcomes. Furthermore, we used CrowdTangle for data collection. CrowdTangle only provides information about public posts in groups monitored by the tool. Therefore, our result does not represent the entire Facebook.