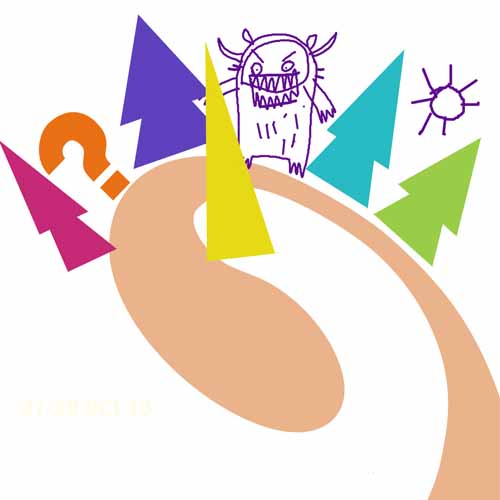 The first thing you do when you begin your PhD is label your Endnote library “the woods.”  Your supervisor has warned you: you must not get lost.  I know you, your supervisor says, you’ll wander around forever, out there amongst the research. You’re too scared to tell them that you’ve already wandered off the beaten track, skirted around the signs that say "beware of the neurosis," and become entangled.

According to the dictionary, neurosis is characterised by “obsessive thoughts and compulsive acts.” Perhaps you fell into this state way back at the beginning when things started getting rocky. The woods are dense now. You have a vague sense that there’s something out there, a many-headed creature with teeth—and possibly a red pen—waiting to pounce, to tear off your academic garb and reveal the fraud beneath. But the journey’s been worth it; up ahead you see a gap in the trees. You catch a glimpse of sky, and the possibilities beyond.

There’s no point complaining about all of this. You’ve no one to blame but yourself; the minute you began, you were asking for trouble.

As beginning research students, we are told that we need to find a research “problem” or “question.” Trouble is a synonym for “problem” and perhaps it is fitting that the research problem that we are encouraged and required to answer as students can also be substituted with the word “trouble,” as that is undoubtedly what it causes. A researcher’s contribution to knowledge relies on the ability to identify gaps in the knowledge and to be dissatisfied with what is the current status quo. A researcher seeks out trouble—not without trepidation—because they know trouble can be the site for new innovation, new approaches and new discoveries. The metaphor of a journey is an apt one, for research narratives, like fictional ones, move from a stable beginning, through complications and rising action to another point of equilibrium at the end (Brady 16). As Barbara Hardy states, narrative “should not be regarded as an aesthetic intervention used by artists, but as a primary act of mind transferred from art to life” (5).

While the conference focused on the troubles encountered in the postgraduate research journey in particular, this special issue of M/C Journal has a wider focus, although these troublesome research narratives operate implicitly beneath the words. As a result, the papers in this special issue speak to the theme of trouble on two levels. Firstly, researchers identify trouble explicitly when establishing a gap in the knowledge or challenging an existing convention or practice. These papers also represent the finalisation of the implicit or personal journey through the research. They are the culmination of trouble. Each paper demonstrates one in a multiplicity of approaches to dealing with “trouble” in research across a variety of disciplines.

The first paper in this edition, Ladies on the Loose: Contemporary Female Travel as a "Promiscuous" Excursion, examines the troubling nature of female travel writing and, in particular, the tendency of women travel writers to preface their work with an apology. Kate Cantrell explores the expectations and limitations placed on female travellers whose journeys outside the sphere of the home are traditionally viewed as hazardous. The problematic feeling of guilt associated with leaving the home raises questions of female travellers actively going out and looking for trouble. Cantrell analyses key travel texts including Robyn Davidson’s Tracks, Elizabeth Gilbert’s Eat, Pray, Love and several iterations of the fairytale, Little Red Riding Hood. This paper illuminates the troubling divide that still exists within the gendered practice of travel.

While Kate Cantrell traversed the world of travel in her paper, Timothy Strom’s Space, Cyberspace and Interface: The Trouble with Google Maps traverses the digital world of Geographic Information Systems—in particular, Google Maps. Strom is certainly “asking for trouble” by challenging the routine behaviour of contemporary consumers. As a result of the enormous surge in smart phones, the Google Maps application is used by a staggering amount of people. According to current research in the United Kingdom, Google Maps is the leading application with 6.4 million users or 73.3% of all UK application users (ComScore). Strom’s paper raises some interesting similarities between the empires of colonial eras in the past and the current “Google Empire” of today. Advertising buys businesses substantial representation on Google Maps, yet the process lacks transparency; the scaling of business symbols, for instance, appears radically different for no apparent reason. It is indeed troubling to think of society’s tools, which most consumers use without thought, can be politically and commercially aligned. Yet Strom encounters what all of this issue’s researchers did; by challenging and exploring the cartographic elements of Google Maps and striving to make visible what is otherwise an invisible process, he has stumbled upon more questions rather than answers. Mashups are one possibility of “resistance,” Strom suggests, but ultimately it would require eliminating the product-driven ideology that underpins the corporation. This is potentially too idealistic for our increasingly globalised and consumerist society.

Maree Kimberley also identifies the possibility of resistance in her paper, Neuroscience and Young Adult Fiction: A Recipe for Trouble? Kimberley identifies a troubling trend in young adult dystopian fiction that relies on neuroscientific concepts. Recent developments in neuroscience have revealed that the structure of the human brain has the ability to change in profound and long-lasting ways, a characteristic know as neuroplasticity. The adolescent brain displays this plastic quality; during adolescence skills such as impulse control and decision-making are still in a process of development. Kimberley cites examples from Scott Westerfield’s Uglies series; Brian Klass’s Dark Angel and Brian Faulkner’s Brain Jack to demonstrate that although this new discovery has the potential to empower adolescents in fictive works, affirming the notion that they have the ability to shape their own minds and behaviours, many writers of young adult dystopian fiction represent their teenager characters as having no control over the shaping of their own brains. In identifying this lack, Kimberley opens up the opportunity for a new kind of young adult writing that situates the power of neuroscience firmly in the hands of adolescents.  But, she warns, teenagers challenging the authority of adults may be a recipe for trouble.

Richard Carroll has already discovered trouble in his paper The Trouble with History and Fiction, which documents the on-going conflict between historians and writers of fictive history as they grapple with ways of representing the past. Carroll observes that historians and writers of historical fiction are both constructing the past through narrative forms. However, while the historian is bound by the need to verify their claims from a variety of valid sources, the writer of fiction is free to imagine and invent. In a post-modern era, historians face what Norman Denzin and Yvonna Lincoln (19) describe “as a crisis of representation.” Some historians’ self-exclusion from the imaginary have left them on shaky ground, and opened up a space for historical fiction writers like Kate Grenville to produce texts that are at once imaginative and based on historial reality. As Carroll notes, however, Grenville’s act of fictionalising history has not escaped criticism. In this paper, Carroll reminds us that an act that attempts to move between discourses, such as the fictive and the factual, is bound to cause trouble.

Ariella Van Luyn’s creative work, Crocodile Hunt, occupies the borders of factual and fictive discourse that Carroll explores. Set in Brisbane, the work intertwines the personal trouble encountered by the main character, Murray, after the breakdown of his relationship, with the wider political turmoil that culminates with the bombing of the Communist Party headquarters in Brisbane in 1972. Unlike traditional historical accounts, this fictionalised history focuses on the personal and emotional response of characters. This story demonstrates the ways in which imagination can serve as a tool to negotiate the troubling gap in an historical narrative.

The final inclusion in the edition is a creative work by Jarryd Luke. Although not as localised as Van Luyn’s narrative, Halfway House creatively explores troubles in its two young protagonists.  Luke’s haunting short story speaks of two twins that escape an uncomfortable home life on the back of truck—in half a house being transported across the country. The narrative is troubling for many reasons. It illustrates the struggles the boys have with each other, with society, and the expectations placed upon them. The symbol of a broken house, literally cut through the middle, is a powerful one; Luke’s descriptive prose creates a troubled image of a house in crisis—hallways that lead to nowhere, rooms without doors. As Kimberley explores the more troubling side of dystopic youth fiction, Luke’s story is a disturbing image of male youth that blindly takes opportunities with no thought to where it might lead them. Ryan and Josh are certainly troubled characters, and like intrepid researchers, have no concept of what awaits them. Interestingly, they are never free of trouble, despite escaping the clutches of their violent father (for now), they encounter trouble at every turn. Trouble continues to find them, whether they are searching for it or not.

What these papers share is the mapping of uncharted territories: whether it is the spaces between young adult fiction and neuroscience, or the spaces between history and fiction. Often, in attempting to chart new territories, researchers discover the extent of what remains unknown. Many of these papers, while reaching valid conclusions, also highlight the need for further research. The qualitative research journey is often characterised by “cycles of planning, acting, observing and reflecting” (Hearn et. al. 5). Troublesome research journeys are cyclic rather than linear. When researchers actively leave the path, and enter the woods, they realise that, while they are progressing forward, it is not always in a straight line. These papers have reached an end of one journey, yet signal multiple pathways for the next troubling encounter. Perhaps asking for trouble just leads to more questions.

I'm a PhD candidate at the Queensland University of Technology (QUT) in the creative industries faculty. My background is in creative writing and literary studies.