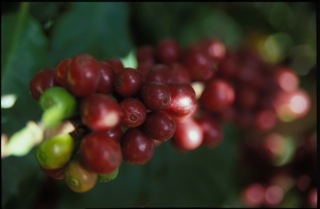 By the 12th century, coffee was extensively cultivated in Yemen, and qawha and cahveh, hot beverages made from roast and ground coffee beans, became popular in the Islamic world over the next 300 years. Commercial production of coffee outside Yemen started in Sri Lanka in the 1660s, Java in the 1700s, and Latin America in 1715, and this production has associations with histories of colonial expansion and slavery. Introduced to Europe in the 17th century, coffee was described by Robert Burton in the section of his 1628 Anatomy of Melancholy devoted to medicines as “an intoxicant, a euphoric, a social and physical stimulant, and a digestive aid” (quoted in Weinberg and Bealer xii).

Today, more than 400 billion cups of coffee are consumed each year. Coffee is also an ingredient in a series of iconic dishes such as tiramisu and, with chocolate, makes up the classic mocha mix. Coffee production is widespread in tropical and sub-tropical countries and it is the second largest traded world commodity; second only to oil and petroleum. The World Bank estimates that more than 500 million people throughout the world depend on coffee for their livelihoods, and 25 million of these are coffee farmers. Unfortunately, these farmers typically live and work in substandard conditions and receive only a small percentage of the final price that their coffee is sold for. The majority of coffee farmers are women and they face additional challenges, frequently suffering from abuse, neglect, and poverty, and unable to gain economic, social, or political power in either their family’s coffee businesses or their communities. Some farm coffee under enslaved or indentured conditions, although Fair Trade regimes are offering some lessening of inequalities. At the opposite end of the scale, a small, but growing, number of high-end producers market gourmet sustainable coffee from small-scale, environmentally-aware farming operations.

For many in the West today, however, coffee is not about the facts of its production; coffee is all about consumption, and is now interwoven into our contemporary cultural and social habits. Caffeine, found in the leaves, seeds, and fruit of the coffee tree, is an addictive psychoactive substance, but has overcome resistance and disapproval around the world and is now unregulated and freely available, without licence. Our gastronomic sophistication is reflected in which coffee, brewing method, and location of consumption is chosen; our fast-paced lifestyles in the range of coffee-to-go options we have; and our capitalist orientation in the business opportunities this popularity has offered to small entrepreneurs and multinational franchise chains alike. Cafés and the meeting, mingling, discussions, and relaxing that occur there while drinking coffee, are a contemporary topic of reflection and scholarship, as are the similarities and differences between the contemporary café and its earlier incarnations, including, of course, the Enlightenment coffee house.

As may be expected from a commodity which has such a place in our lives, coffee is represented in many ways in the media—including in advertising, movies, novels, poetry, songs and, of course, in culinary writing, including cookbooks, magazines, and newspapers. There are specialist journals and popular serials dedicated to expounding and exploring the fine grain detail of its production and consumption, and food historians have written multiple biographies of coffee’s place in our world. So ubiquitous, indeed, is coffee, that as a named colour, it popularly features in fashion, interior design, home wares, and other products.

This issue of M/C Journal invited contributors to consider coffee from any relevant angle that makes a contribution to our understanding of coffee and its place in culture and/or the media, and the result is a valuable array of illuminating articles from a diverse range of perspectives. It is for this reason that we chose an image of coffee cherries for the front cover of this issue. Co-editor Jill Adams has worked in the coffee industry for over ten years and has a superb collection of coffee images that ranges from farmers in Papua New Guinea to artfully shot compositions of antique coffee brewing equipment. In making our choice, however, we felt that Spencer Franks’s image of ripe coffee cherries at the Skybury Coffee Plantation in Far North Queensland, Australia, encapsulates the “fruitful” nature of the response to our call for articles for this issue. While most are familiar, moreover, with the dark, glossy appearance and other sensual qualities of roasted coffee beans, fewer have any occasion to contemplate just how lovely the coffee tree is as a plant.

Each author has utilised the idea of “coffee” as a powerful springboard into a fascinating range of areas, showing just how inseparable coffee is from so many parts of our daily lives—even scholarly enquiry. In our first feature article, Susie Khamis profiles and interrogates the Nespresso brand, and how it points to the growing individualisation of coffee consumption, whereby the social aspect of cafés gives way to a more self-centred consumer experience. This feature valuably contrasts the way Starbucks has marketed itself as a social hub with the Nespresso boutique experience—which as Khamis explains—is not a café, but rather a club, a trademarked, branded space, predicated on highly knowledgeable and, therefore, privileged patrons. Coffee drinking is also associated with both sobriety and hangover cures, with cigarettes, late nights, and music. Our second feature, by Jon Stewart, looks at how coffee has become interwoven into our lives and imaginations through the music that we listen to—from jazz to blues to musical theatre numbers. It examines the influence of coffee as subject for performers and songwriters in three areas: coffee and courtship rituals, the stimulating effects of caffeine, and the politics of coffee consumption, claiming that coffee carries a cultural and musicological significance comparable to that of other drugs and ubiquitous consumer goods that are often more readily associated with popular music.

Diana Noyce looks at the short-lived temperance movement in Australia, the opulent architecture of the coffee palaces built in that era, what was actually drunk in them, and their fates as the temperance movement passed into history. Emma Felton lyrically investigates how “going for a coffee” is less about coffee and more about how we connect with others in a mobile world, when flexible work hours are increasingly the norm and more people are living alone than any other period in history. Felton also introducess a theme that other writers also engage with: that the café also plays a role in the development of civil discourse and civility, and plays an important role in the development of cosmopolitan civil societies. Ireland-based Máirtín Mac Con Iomaire surveys Dublin—that tea drinking city—and both the history of coffee houses and the enduring coffee culture it possesses; a coffee culture that seems well assured through a remarkable win for Ireland in the 2008 World Barista Championships. China has also always been strongly associated with tea drinking but Adel Wang introduces readers to the emerging, and unique, café and coffee culture of that country, as well as some of the proprietors who are bringing about this cultural change. Australia, also once a significant consumer of tea, shifted to a preference for coffee over a twenty year period that began with the arrival of American Servicemen in Australia during World War II. Jill Adams looks at the rise of coffee during that time, and the efforts made by the tea industry to halt its market growth. These strong links between tea and coffee are reflected in Duncan Barnes, Danielle Fusco, and Lelia Green’s thought-provoking study of how coffee is marketed in Bangladesh, another tea drinking country.

Ray Oldenberg’s influential concept of the “third place” is referred to by many authors in this collection, but Anthony McCosker and Rowan Wilken focus on this idea. By using a study of how Polish composer, Krzysztof Penderecki, worked in his local café from 9 in the morning to noon each day, this article explores the interrelationship of café space, communication, creativity, and materialism. Donna Lee Brien brings us back to the domestic space with her article on how the popular media of cookery books and magazines portray how coffee was used in Australian cooking at mid-century, in the process, tracing how tiramisu triumphed over the trifle.

By exploring the currently fashionable practice of “direct trade” between roasters and coffee growers Sophie Sunderland offers a fresh perspective on coffee production by powerfully arguing that feeling (“affect”) is central to the way in which coffee is produced, represented and consumed in Western mass culture. Sunderland thus brings the issue full circle and back to Khamis’s discussion, for there is much feeling mobilised in the marketing of Nespresso.

We would like to thank all the contributors and our generous and erudite peer reviewers for their work in the process of putting together this issue. We would also like to specially thank Spencer Franks for permission to use his image of coffee cherries as our cover image. We would lastly like to thank you the general editors of M/C Journal for selecting this theme for the journal this year.

Donna Lee Brien, BEd (Deakin), MA (UTS), PhD (QUT), Grad Cert in Higher Ed (UNE), is Associate Professor of Creative Industries at Central Queensland University, Australia. Her biography, John Power 1881-1943, is the standard work on this expatriate artist and benefactor, and she is co-author (with Tess Brady) of the popular self-help books Girl’s Guide to Real Estate: How to Enjoy Investing in Property and Girl’s Guide to Work and Life: How to Create the Life you Want (both published by Allen & Unwin, Sydney). Founding Editor of dotlit: The Online Journal of Creative Writing and Assistant Editor of Imago: New Writing, Donna is currently Special Issues editor of TEXT: Journal of Writers and Writing Programs and on the Board of Readers for Coolibah. She is the Immediate Past President of the Australian Association of Writing Programs.