Artist in the Kitchen: The Kitchen as Studio

Vol. 16 No. 3 (2013): cookbook
Published 2013-06-22
Articles
As a visual artist, the kitchen has often been the “centre of my home” in a sense that goes beyond the cliché. Over the years I have lived in more than my fair share of tiny houses or apartments where the kitchen has also become my art studio as limited financial resources as well as the needs of my children prevented me from renting a separate studio space.

In these kitchen studios, I frequently drew inspiration from things and life around me, sketching aspects of the room and the objects in it. By training a printmaker, these sketches often evolved into prints, usually either as etchings or linocuts. Linocuts particularly lend themselves to working in a limited space as they require little by way of technical equipment. So, after dinner with the dishes cleared away, my linocutting tools and linoblocks would emerge and my kitchen took on a different purpose. 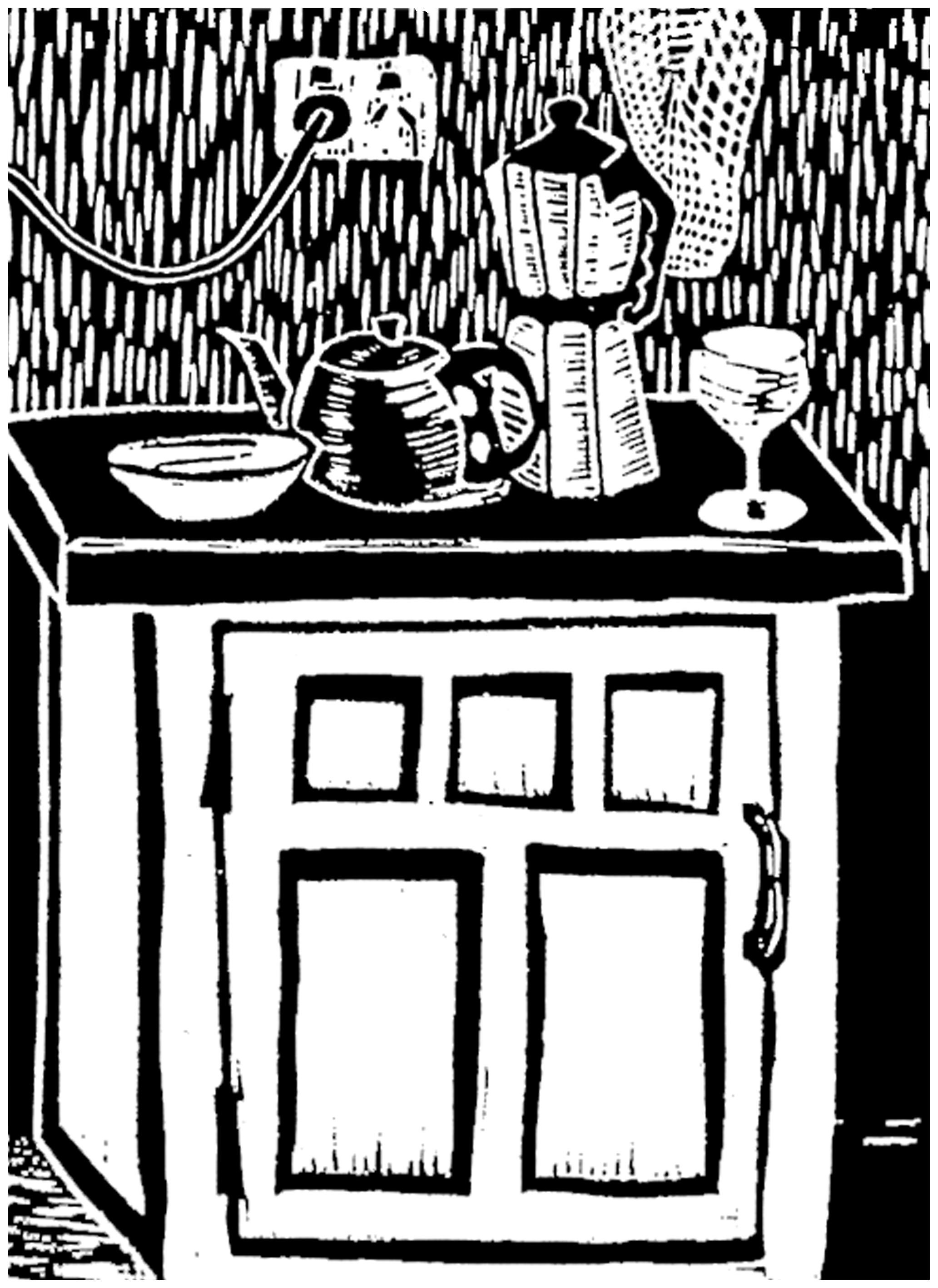 Brian O’Doherty asserts that a different concept of time exists within artist studios where the space is dedicated solely to that purpose. The artist may leave work and tools as they are to come back to later, and in this sense, time is suspended. No such luxury of suspending time is afforded the artist who has to push aside her or his work to prepare the next meal. While many artists work in studios which occupy a domestic space, whether that be the garage, a converted spare bedroom or a basement, there is something about the kitchen that makes its shared function as a food preparation area and a place to make art more contentious, as the tools and equipment of each activity must be completely removed before the alternate function of the space can be implemented. Not least among these considerations are health and safety, which plays a significant role in the need to delineate the functions of the kitchen clearly (Radaydeh and Otoom, Rossol).

Brian Winkenweder suggests of the kitchen that “the hermetic reality of this contested space ossifies gender roles and responsibilities in a patriarchal society unlike no other domestic space” (239). Winkenweder’s article focuses on Joseph Beuys and John Cage, and this ossification is apparent in the absence of acknowledgement that this is an issue. However, he suggests that a different perspective is offered by Martha Rosler and Olga Chernysheva, who “confront the kitchen specifically as a women’s space charged with societal tension, dialectically countering romanticized versions of kitchens” (244). In the six minute black and white film of Rosler’s performance piece, Semiotics of the Kitchen, she acts out the politics of the kitchen with deadpan wit. Straight to camera, she performs an alphabet using kitchen implements to demonstrate the letters, often with tense and violent gestures. Rosler’s kitchen can not be viewed as the warm and happy centre of the home: in naming the kitchen objects, the woman is naming her own oppression.

Winkenweder examines theoretical implications of the kitchen praxis by both male and female artists and Rosler comments on the politics of the space itself. While acknowledging these dynamics, my interest centres on the shifting dynamic of cooking and making art in the same space. Issues of claiming a space arise and I think of Virginia Woolf’s A Room of One’s Own.

I eventually did get a room of my own, so to speak: a dedicated studio space that I love to work in and where the scale of my work is limited by the environment to a much lesser extent. But there are still many evenings when my preferred place to work on my art is at the dining table, with the remnants of dinner around me, and the aromas from the kitchen present.

O’Doherty, Brian. Studio and Cube: On The Relationship Between Where Art is Made and Where Art is Displayed. New York: Princeton Architectural P, 2012.

Winkenweder, Brian. “The Kitchen as Art Studio: Gender, Performance and Domestic Aesthetics.” The Studio Reader: On the Space of Artists. Eds. Mary Jane Jacob and Michelle Grabner. Chicago: U of Chicago P, 2010. 239–50.