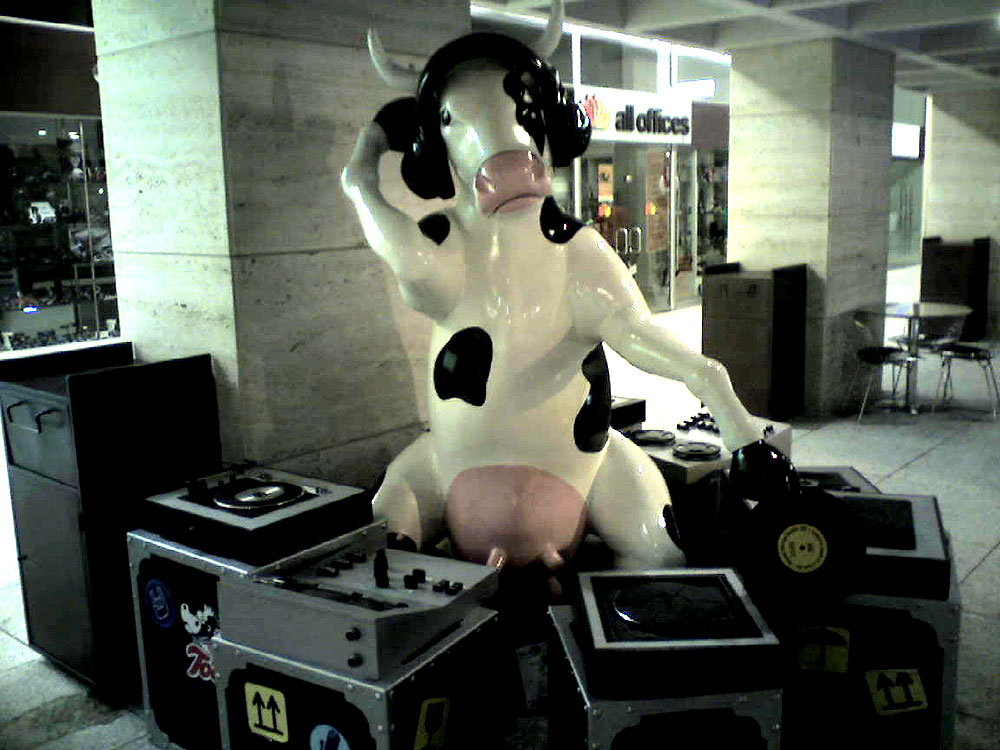 The word ‘remix’ marks venerable and longstanding creative practices and embeds them in a particular aesthetic, social and technological conjuncture. This is both the strength and the weakness of the term: in foreshortening the histories of that which it now names, it highlights the relationship between the participatory affordances of contemporary media technologies and the sense of contemporary media flows as recombinant; as involving the distributed reassembly, reconfiguration and circulation of pre-existing cultural and material elements. Remix situates this work as both artefact and practice, noun and verb. The risk is that in doing so, it is both dehistoricizing, and oddly anachronistic and ‘analogue’. One is always somehow waiting for the post-remix, or the premix (the ‘mix’ itself implies a slippage, an acknowledgement of multiplicity at the site of origin).

Remix suggests some kind of authoriality and semiotic differentiability and sequence, pace Baudrillardian fantasies about the digital labour, prosumer, cognitive capitalist, copypasta meme factory. Remix is on a continuum on this trajectory, but at a point where we feel we can still see fairly confidently in both directions. This is one of the features of the term that gives it its ‘stickiness’: it is used, as our contributors show, to describe a wide range of practices. In turn, this attribute highlights some of the varying moral work that remix does as a predicate, in relation to ideas around originality, authorship and plagiarism; ownership, permission, and the commons; the autonomy or otherwise of culture from commerce; the cultural and social importance of the archive and the best means of engaging with it; the roles and functions of capital and the law with respect to contemporary ‘folk’ artistic practices; and the affective significance of the past and the passage of time. Remix suggests a certain kind of commemorative honouring of the past and of what we find meaningful in our common culture, inflected and sometimes problematized by the broader structures which mediate that culture to us. It implies also a technologization of how this honouring is conducted, a two-way mediatization, the widespread enculturation of particular communicative and distributive technological systems for getting the remix done. It implies a specific sociocultural and techno-aesthetic grammar.

Like the various materials that are subject to remix, the word itself then is promiscuous. As such, both specificity and scope in understanding what remix ‘means’ entail investigations around and into the word as a kind of heuristic or analytic. Remixes are often local artefacts, exhibiting family resemblances in terms of the uses to which their intertextuality is put. These resemblances point towards the meaning-making practices present in those semantic, discursive, and social webs through which these artefacts become sensible.

Much of the current literature promotes the idea (notable, for example, in the work of Lessig), that remix is some kind of intervention in the cultural economy, whereby audiences become liberated into participation in cultural production. This participation in cultural dialogue through remix is heralded as a new era of democratized consumer activism. The converse argument suggests that remix is wholly incorporated as ‘playbour’: users generate content for free, used by others for profit. Remix as ‘resistance’ seems to occur solely at the level of the sign, overlooking the extent to which vernacular creative work is rendered an integrative cultural commodity. The logical conclusion of this kind of argument is an emphasis (such as that found in Adorno) on the extent to which cultural commodities have colonized the lifeworld. Without recourse to the cultural resources given by neoliberal capitalism, nothing at all can be said, even by nonconformists. There is nothing outside the desiring machine. Indeed, the very fact that dissent is so often expressed exactly through the means given by dominant cultural systems shows just how insidious they are.

But both of these accounts only get us so far. Effectively, they leave us in a remix-good/remix-bad binary. One account is not really ‘deeper’ than the other, because in a sense both are missing the larger point. The early fixation on the remix as itself a laudable cultural intervention tends to exacerbate the tendency towards these either-or readings. Dominant meanings are demonstrably contestable, and contested every day. Of course, the semiotic meaning of particular remixes and the means by which these remixes operate within the discursive or semiotic field require attention and interrogation. But these meanings and the practices that give rise to them are also read off, given, and sanctioned within specific social and cultural contexts and specific ethical, interpretive, and legal frameworks. These contexts and frameworks and their social logics require explication. Our argument here is not precisely that we need anthropological, sociological, legal, etc. accounts as well as textual analyses and deconstructions of particular remixes and remix forms and genres. It is that remix, as a hybrid cultural form and practice, is literally neither quite here nor there. An adequate grasp of remix and its implications entails empirical work, showing and unpacking what it is that makes remix important to the various and diverse communities who sustain it and are sustained by it.

A good way in to this issue is to reflect on the permissibility or otherwise of the use of particular resources within a specific remix subculture; the moral limits of the remixable. In the feature article, fan fiction scholars Kristina Busse and Shannon Farley discuss the implications of an incident within a particular fan fiction community, where an as-yet-unarticulated norm regarding the limits of textual appropriation - specifically, the use without permission of the work of other fan fiction writers - came abruptly to collective attention. Drawing out the distinctions and nuances from this incident and contextualising it in relation to broader fan fiction community opinion, Busse and Farley carefully differentiate this infraction from plagiarism and from copyright infringement in emic terms, showing how fan-fiction writers themselves articulate, invoke and enact community with respect to such norms.

Ruth Walker further elaborates on the concept of plagiarism by analysing academic quotation as a form of remix. Rather than ascribing to the stringent rules of referencing, Walker suggests that framing academic and student writing as a form of remix allows for a playful re-use of scholarly conventions and a more creative use of existing academic work.

In ‘Locating Anti-Fandom in Extratextual Mash-ups’, Bertha Chin examines how the remix video Buffy vs Edward demonstrates anti-fandom responses to the Twilight series. By placing the ‘empowered’ role model of Buffy in the position of Bella, the romantic hero of Edward is suddenly re-framed as a self-obsessed stalker. Chin argues that rather than demonstrating fannish love for the texts, Buffy vs Edward is an anti-fandom critique of the troubling aspects of a popular series.

In his article on slash manips, Joseph Brennan discusses a case study of visual slash - the combinatory digital manipulation of images of characters from popular media and gay pornography. Attending particularly to compositional strategy and the physical and bodily syntax of this often overlooked form of remix, Brennan’s argument inflects the dominant scholarly understandings of slash as a genre coded as ‘female’.

In ‘Taking This from This and That from That’, Phillip Cunningham and Melinda Lewis make a case for considering the role remix, and pastiche specifically as a variant of intertextual poaching, plays in the directorial styles of RZA and Quentin Tarantino, and in the ‘self-fashioning’ particularly of RZA. Remix is here not a democratizing, niche strategy, but something central to creative practice within the core of the contemporary mass-market cultural industries. Cunningham and Lewis argue that the work of RZA highlights hybridity in multiple ways, particularly across both media form and the tropes of genre.

Following this, Rob Cover proposes a new framework for the analysis of the remix as a text in ‘Reading the Remix’. Using the language of ‘layering’ drawn from digital manipulation terminology, the remix can be understood as a type of layered intermedia. Cover provides a concrete process for teaching remix analysis in an undergraduate classroom, drawing on a rich variety of theoretical models and methodologies.

Attention in current debates about remix is frequently drawn to the institutional structures that go to make the practice more or less easy - or more or less easy to block. Olivia Conti’s paper uses the idea of the dialectical vernacular to describe YouTube and similar sites, as mediators between vernacular and institutional discourses (in this instance, political remix video-makers, and rights holders). Her account of the technico-legal mechanics of Youtube takedowns highlights the paradoxical status of political remix video, as something which both draws its political potential from its infringement of base material (in terms of the process itself, and the altered meanings of the content), and is rendered vulnerable to takedown by the same token.

‘Musical Chameleons’, Maarten Michielse’s piece drawing on extensive research on the online music remix community Indaba Music, returns attention to the perspectives of remixers themselves, considering in this instance what they hold to be valuable attributes for a remixer to have. Michielse develops work around the concepts of flexibility and fluency as aspects of creative practice, to describe what it is that competitive digital music remix producers strive for with respect to the musical materials they work with and on.

Jonathon Hutchinson then explores the relationship between remix and the institution of public service media in his piece on textual reappropriation within the ABC. While public service broadcasters like the ABC have sought to encourage audience participation through user-generated content, the content of remixes is often controversial and opens the institution to public criticism or lawsuits. Using a case study of how the ABC responded to complaints of a particular remixer, Hutchinson examines the limits of creative remix in an institutional setting.

The ethics and aesthetics of remix are further situated and explored by Patrick West and Cher Coad in their paper, ‘Drawing the line’, which explores disjunctive Chinese and Western ideas of the materialism of writing practice, namely calligraphy, particularly in relation to the charges of plagiarism laid against Kathy Acker’s novel Blood and Guts in High School. West and Coad use Deleuzian notions of the line and of repetition to expose and problematize received ideas of authoriality and textuality.

Last but by no means least, Darren Tofts and Lisa Gye round off the issue with a discussion of the Classical Gas project, where canonical works in media and cultural theory are mashed fannishly up into album covers from the days when album covers meant something. Tofts and Gye reflect on their practice in the work that goes into these hilarious and oddly moving images, returning us to the haunting delight of the old made strange and the novelty of the unexpectedly familiar new that is part of the visceral appeal of remix culture.

We would like to thank the contributing authors, the anonymous, thoughtful and diligent peer reviewers, Axel Bruns and the M/C team, and the remix artists and communities who drew us all variously to this endeavour.