Manoeuvring through the Mix 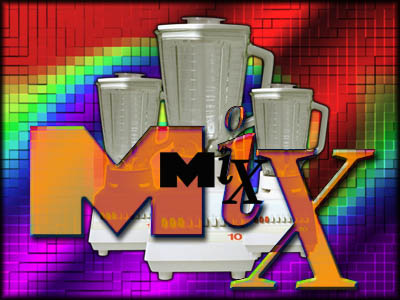 It would be fair to say that in our day to day negotiation between the personal and the public, we encounter and process cultural, material and symbolic products in all strata and sections of society. In our homes and in our workplaces, we appear to manage multiple senses of timekeeping and contrasting time-frames with fluid unconscious dexterity. In our forms of entertainment and relaxation, from print to television to cinema or from html to Mp3s to DivX, we juxtapose like and unlike metaphors/images/products/ text in a post-Frankensteinian assemblage of innovated cultural meaning – for example, The Phantom Menace and Austin Powers are commentaries on our visual eclecticism, from mixing mythological elements from feudal times in a space opera to our nostalgic enjoyment of presenting the old sixties' "style" as renewed, millennium-way;Napster is a logical extension of file-sharing which reflects a globalising trend towards the distribution of all content worldwide while meeting the specific requirements of individual taste (that is, the do-it-yourself musical cdrom drawn from thousands of international mp3 libraries).

Likewise, in our trade of human utterances and syntax, multiple meanings become attached to words and sentences simultaneously in a variegated exploitation of interpretative dissonance. Oxymora abound and debates over interpretation form the contents of a great number of publications or the motivation behind short-circuiting dominant meanings. For example, in the oxymoron play with language, there exist useful combinations of opposite terms like "Original Copy", "Pretty Ugly", "Genuine Imitation", or "Microsoft Works" which have a commonsense use in daily exchanges. Or, in dialogues on the power behind mutual intelligibility, a term like 'sex', which means one thing in gender discussions, can be used in other contexts or moments to indicate the erotic. Through such language manoeuvres in the fields of meaning-application and interpretation, persons are accepted or discriminated where power differentials are predicated on difference of understanding. Where interpretative practices differ, or where intelligibility is definitely not mutual, misunderstandings and resistance breed. In this way, in our millennium of revealing society's mixture of meaning, the instrumentalities of master narratives are being unmasked in voicing these moments (and rules) of misunderstanding and resistance.

What was once predominantly treated as a text or object -- sometimes exhaustively studied in isolation from various social and historical contexts, other times as cultural products facilitated by processes of production and consumption -- is now examined within or alongside different contexts and meanings. It is more contemporaneously sensitive towards our wonderfully elaborate and diverse mix of interpretative practices to situate cultural products and interpretative orders in relation to other social practices, political structures of dominance and exploitation, and cultural hierarchies like race, class, gender and cyber. The implication of this approach is that the meanings of material and symbolic products are no longer stable nor replicated in identical fashion within cultural dna. Society instead is transmitted from generation to generation with mutations, and unlike cultural artefacts conjoin in new births of meaning. The mix gene, it would appear, is widely dispersed in intricate and novel ways.

The articles in this publication by M/C serve to illustrate the significance of ‘mix’ for reshaping cultural products, social ideas, even learning pedagogies, in ways that dramatically affect how we perceive and interpret the world. The interpretations of ‘mix’ by contributors were diverse, as expected by the broad uses of the word ‘mix’. Popular culture, however, remained a dominant aspect of culture for analysis, and this is reflected in the mix of articles we have chosen. These articles demonstrate that the fine lines separating genres can be smudged and shaded, and that meaning can be created from blending and swirling rather than only through linearity.

Our feature article, "Digital Transformations: The Media is the Mix" by Lori Landay talks about the digital media and its hybrid form and content. This article thinks through "how digital narrative emerges from the mix of interactivity and nonlinearity" – this makes for a non-traditional narrative in both its structure and the way meaning is derived from it. The recombinations draw the spectator into the mix, where the mix is the content.

Owen’s Chapman’s "Mixing with Records" follows Landay’s article in the sense that the linear format of the vinyl record, both in its constitution and the way it is played and listened to, is disrupted by the dj practice of "mixing" to create a new audio product. This new sound is created by the interaction of the dj and the choices of sounds, and how these sounds are put together in a new ‘mix’.

Toby Daspit’s "The Noisy Mix of Hip Hop Pedagogies" responds to a familiar parental request — "Turn down that damned noise!!!" — in an engaging examination of educational experiences, epochal shifts and the wider implications of incorporating hip-hop aesthetics and recombinant textuality into schooling pedagogies. Daspit’s discussion over a fundamental reorientation to educational pedagogies is a timely piece which resonates well within the ‘mix’ imperative.

The mixes evident through narrative are also investigated by Jody Mason, though her article on Bharati Mukherjee’s Wife looks more at thematic mixes within an individual literary character’s life, rather than mixes of meaning, structure and format. Mason’s article looks at the mix of cultures and the impact of that mix upon a female character. It seems, through an analysis of Wife, that different components and subject positions don’t always mix well, if indeed at all.

Cutting up narrative, and cutting up sound, mixing it up and creating something new. These two distinct media are twisted together in Jeff Rice’s article, "They Put Me in the Mix: William S Burroughs, DJs, and the New Cultural Studies". The article itself cuts and pastes three key cultural events to prepare an argument that questions the methods of cultural studies regarding new media practices.

Mark Pegrum takes a theological perspective on ‘mix’ in "Pop goes the spiritual", and interrogates society’s increasing trend towards religious eclecticism via an assortment of contemporary examples of religious references made by Western pop stars. Pegrum introduces us to this relatively new phenomenon by looking at the dizzying admixture of religions to be found in the songs and words of artists and groups worldwide.

Collectively, these articles demonstrate how dynamic meaning is intimately linked to the idea of 'mix' and is concerned with questions of meaning and value, of culture and philosophy. To rework a tired cliché, no meaning is an island to itself but is an integral part of a shifting, fluid, and unusual combination of cultural, material and symbolic products in various ‘mixes’.