It's Not An Easy Thing Meeting your Maker. 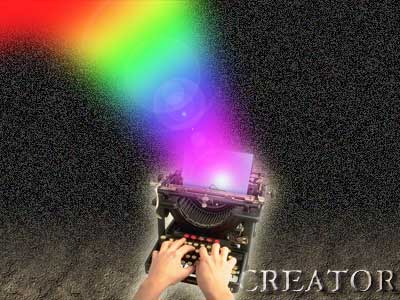 Creators do not just 'create' or 'act' -- they are privileged agents, points of origin, sources of innovation and transformation. Within religious systems, creators can exist in an extra-discursive real beyond nature and culture, functioning as the origin of the word and being. They can be supernatural, existing outside nature to influence earthly events via strange powers. They can also be 'supra' natural -- above nature -- capable of acts that both break and establish laws to which the created are subject. Yet, these types of creators only seem to exist through the cultural economies which allow their representation. Their roles and personas can differ with the production, combination and utilisation of selected characterisations: in other words, creators are created.

As these texts explore, the idea of creator is a site of textual contestation, where creations must be authenticated not only by their authors but by their believers. These fictive acts and others like them, explored to great narrative detail in 'The Fall of Every Sparrow', contribute to the way we collectively construe and construct the idea of creators. Yet the notion of 'creating' used here can also be understood as a process of transformation and, in this sense, it is argued that creators 'act', that they produce and position the object of their creation as a social process or discrete detail to which people respond accordingly. It is in such an environment that society can claim to collectively worship the 'works of the great masters' and yet not draw evidence of an artist's signature from an almighty creator written in the living world. And though it might remain unclear or at least debatable whether these 'masters' truly perceived themselves as such, it is clear that from time to time society requires its citizens to legitimise such positioning through culturally accepted activities and institutions: for example, gala musical performances, poetry and prose readings, publications and book launches, art galleries and festivals, etc.

Our feature article, A Remarkable Disappearing Act: immanence and the creation of modern things by Warwick Mules, considers modern creation not as a phenomenon of the gifted artistic individual, but as present in the mediated spaces of the everyday. Drawing upon the theories of Latour and Deleuze and Guattari, he argues that the mode of desire of contemporary consumer culture is "the ghost of a certain kind of immanence which has haunted modernity and its projects from the very beginning." Mules traces this immanence to Descartes' creation of the modern ego on the paradoxical basis that an autonomous subject is conceivable only on the grounds that it partakes in something outside of itself (in Descartes' case, God). Mules views the commodity as an exemplary modern object which binds consumers into particular fields of immanence (the relations of consumer formations) in their acts of consumer self-creation.

William J Wilson's fictional work, The Fall of Every Sparrow, recounts the last entry made by one Brother Clothren, an archeotheist whose main duty is to 'mark the fall of every sparrow'. This is an engaging and original piece, exploring concepts of deities 'wrought into existence solely by the collective belief and adoration of the worshipful races' and reflecting upon our own constructions of gods through irony in its evocative play on the contemporary death of the Terrene god Yahweh: 'Tell me about your gods', writes Wilson, 'and I will reveal the inmost secrets of you heart'. This is a piece that defies one reading – it's philosophical penetration demands additional readings.

In The Documentary Photographer as Creator Maria Mitropoulos investigates the tension between creation and the representation of events in the field of documentary photography. She traces longstanding debates in the field between those who emphasise the faithful recording of events, and those who—regarding the technological manipulation of images as a legitimate means of enhancing their impact—emphasise the expressive potentials of the medium. By tackling these issues she argues for the reinstatement of the referent (or the semiotic trace of it) as an object of critical inquiry. In her own conclusions she attempts to avoid the impasse between naïve realism and thoroughgoing constructionism, acknowledging instead how documentary photography may contribute to the becoming of reality.

Bev Curran analyses two novels—Le désert mauve by Nicole Brossard and The English Patient, by Michael Ondaatje— which exemplify "how a translator may flaunt her creativity, and allow the cultural position of the translator vis à vis language, history, or gender to be critically exposed by the text itself." In Portrait of the Translator as Artist, she proceeds from a deconstruction of a received cultural opposition between the author and the translator, in which the activity of former is viewed as creative and that of the latter as derivative. She suggests that translation in the broader sense of an openness to textuality is a creative process which acknowledges influence, positionality and contradictory currents. It allows the creative subject to be transformed in and by versions of reality as a result of giving up the pretence to creative autonomy.

In That All May Be One: Co-creating God, community and religion within the Catholic sisters of St. Joseph, Patricia Foley explores the relationship between goals of self and the goals of religious institutions in the pursuit of social justice. In a personal and touching work about her sister's lure towards a religious organisation providing the opportunity to be 'involved in creative change', Foley considers the 'creation of new possibilities in the expression of faith'. Extending her argument beyond her concerns with her sister, Foley asks perhaps for a reconsideration of the overall location and situation of 'women religious' within and without the community. Foley suggests that contemporary forms of ministry for women can be diverse and empowering in application, which acknowledge more an individual's sense of creative autonomy than following the traditional image of a nun secluded within convent walls, unable to effect a difference. Marginalised positions, Foley argues, can become effective locations for change in rather creative ways.

Leanne McRae examines the relationship between crises of masculinity and bodybuilding in Rollins, representation and reality: Lifting the weight of masculinity. She argues that "The desire to shore-up male power in the face of various 'threats' has called for a corporeal manifestation of masculine dominance." Part of this involves the performance of "superhero" myths across the body in order emphasise the supposed ability of men to create themselves and society. The article ends with a consideration of how rock star/bodybuilder Henry Rollins occupies, but plays with superhero roles, simultaneously embracing and deconstructing associated myths.

Finally, in an extended work, Juliette Crooks concludes this publication by interrogating the traditional depiction of Prometheus being tortured night upon night as perhaps the 'quintessential image of masculinity in crisis'. With a view to contextualising the relationship between creator and created, Crooks examines 'the usurping of maternal (creative) power by patriarchy' and the various experimental models in which masculine identity might be recreated in the contemporary age.

In closing, it can be argued that on the interpersonal, metaphorical, iconic or philosophical status of 'creators', cultural history shows their continual design. The articles in this issue deal with modern concepts of creation, from politics of self and creative autonomy, to the emerging linguistic foreplay between different forms of media and expression. The Romantics invented the author in the form of the creative artist-come-genius who is the originator of unique artistic impulses conceived in accordance with his/her own laws. Such creators seem peculiarly contemporary and it would be fair to argue that the idea of self-creation has stood behind many modern liberal concepts of agency. Yet it has also become the target of critique with the rise of constructionism, which emphasises the agency of language and society in determining subjectivity. And when such agency is debated, we can at least, according to some existentialists and liberals, count on the ability of the authentic individual to have the power to create him or her self. But as this publication aims to demonstrate, not all creators are created equally but are subject to the needs and desires of their worshippers.