"Black Metal is for white people"

constructs of colour and identity within the Extreme Metal scene. 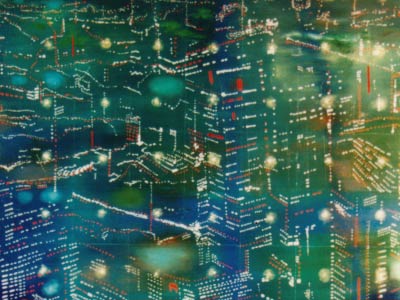 The power of culturally-bound controlling images around notions of 'colour' in regard to ethnicity have historically been marked and far-reaching. Most obvious examples of such political power relations can be seen in regard to racism and social domination. Biologically-based assertions that one specific category of people are somehow inherently inferior or superior to another were central and indeed continue to be paramount in (neo) Nazi-style rhetoric. Such political beliefs, most notable of course within the first half of the Twentieth Century, often went hand-in-hand with a right-wing ecologism that eschewed the alienation of urban life for an idealised rural existence (Heywood 283). This paper focusses upon how such assumptions and controlling images have resonated in recent times within the Nordic Black Metal music scene - an encompassing term used to describe a sub-genre of music that exists within a wider Heavy Metal and in particular Extreme Metal scene.

Black Metal did not gain a stranglehold on Extreme Metal subculture until the 1990s. It also took socio-politics in Metal a stage further and to an extreme never seen before. Being most prolific in Scandinavia, and in particular Norway, Black Metal tended to focus upon Viking mythology and Odinism as a source of subject matter. Here, Nordic Black Metal based its identity on the virtues associated with its geographical location. As Dyer (21) points out, Northern Europe, with its notions of remoteness and coldness, combined with ideas of the cleanliness of the air, the soul- elevating beauty of mountain vistas, and the pureness of the white snow, could be seen to have formed the distinctiveness of a white identity and its related notions of energy, discipline and spiritual elevation.

Such notions have their roots in the National Socialist programme of propaganda films of the 1930s and 1940s. Such films included Ich fur Dich - Du fur Mich (Me for You - You for Me, 1934), (Welch 48), which reinforced Nazi ideals of 'racial purity' and was centred on two interrelated themes; that of Blut und Boden ('blood and soil'), and Volk und Heimat ('a people and a homeland'). Here the strength of the 'master race' was linked to the sacredness of the German soil, usually in the form of some idyllic pastoral setting. Nazi 'revolution' was based upon presumed Germanic traditions and the recapture of a mythical past. Thus urban and industrial life was eschewed in favour of a more Germanic utopian community vision. This led the Nazis to draw an inexorable link between the pureness of the German land and the pureness of the Aryan race.

The idea of the German utopian community raised notions of fitness and survival. For example, Walther Darre, the then Minister for Agriculture, drew Darwinistic parallels between animals and humans when he stated that, “We shall gather together the best blood. Just as we are now breeding our Hanover horse from the few remaining pure-blooded male and female stock, so we shall see the same type of breeding over the next generation of the pure type of Nordic German” (Welch 67).

Such Nazi ideas of purity and survival of the fittest have been echoed in the Black Metal scene of recent years. This has clearly been illustrated, for example, in the sentiments of musicians such as 'Hellhammer', drummer with Norwegian band Mayhem who, when asked if he had fascist views, revealed that “I'm pretty convinced that there are differences between races as well as anything else. I think that like animals, some races are more... you know, like a cat is much more intelligent than a bird or a cow, or even a dog, and I think that's also the case with different races” (Moynihan and Soderlind 306). The comparison of certain people to animals acts to create controlling images that, in this instance, makes racism appear to be natural and inevitable (Collins 68).

As Davis (25) points out, a key belief in racist ideology is the biologically and genetically-based assumption that ethnic minorities share similar patterns of behaviour because it is 'in their blood'. Indeed, it is no accident that some Black Metal musicians have made comparisons between ethnicity and animals. Such comparisons act to not only further this idea of superior 'blood stock' but also serve to dehumanise those who are seen to be inferior.

Black Metal musicians saw themselves as being superior both musically as well as 'racially'. Just as Minister for Agriculture Walther Darre suggested that the pure blooded Nordic German was, although few in numbers, a superior racial minority within the human race in general, certain Black Metal musicians have shared a similar view that they are a racially and therefore musically superior group within the wider Extreme and Heavy Metal scene. Such assumptions have manifested themselves in a number of ways. Musicians such as Varg Vikernes, of Norwegian band Burzum, have made direct links between the development of Metal and assumed qualities of 'whiteness' when he argued that “The guitar is a European invention ... However, the music played on the guitar is mostly nigger (sic) music”, (NME n.pag). In such an example there is the assumption that 'white' Metal and Metal musicians are somehow inherently superior, and that this superiority of talent stems from a racial 'purity' lacking in 'non-white' metal scenes which, consequently, are seen as nothing more than a contamination, both racially and therefore musically.

As Nazi actions were in part based upon the recapture of a mythical past, so too in Black Metal is there a notion that “We must take this scene to what it was in the past”, (Moynihan and Soderlind 60). Thus, as in National Socialism of the 1930s and 1940s, modern day Nazism within the Black Metal scene takes inspiration, ideology and hope from a romanticised notion of the past. This can be seen in the slogans that adorn much Black Metal band's merchandise, for example the band Darkthrone and their self-confessed “Norsk Arisk Black Metal” (Norwegian Aryan Black Metal) which appeared on the sleeve of their 1994 album Transylvanian Hunger, and in the more elaborate socio-political views of other Black Metal musicians such as Varg Vikernes who has expressed his Utopian visions in the belief that there should be a “return to the life-style of the Middle-Ages” in which “The masses need to live in harmony with nature”, (Vikernes n.pag).

The notion that “Black Metal is for white people” (Moynihan and Doderlind 305) was also reflected in other stylistic components of Black Metal iconography. The practice of wearing “corpsepaint” was quickly adopted by nearly all Black Metal bands in the early years of its development, and is still widely used today. The concept of wearing corpsepaint - theatrical black and white makeup that created a gruesome appearance - can be traced as far back as the emergence of rock bands such as KISS and heavier acts such as King Diamond, who became known for their elaborate stage rock shows. However, whilst the adoption of corpsepaint by Black Metal bands may have been to create similar macabre images as more established rock and Heavy Metal bands had before them, the emphasis on 'whiteness' that corpsepaint gives cannot be overlooked. Such images, the pale white face emphasised even further when contrasted with traditional codes of dress - the black denim and leather clothes, can be seen to be emphasising the idea of white being an 'ideal'. That is, the symbolism that is carried by the colour white, its “moral and also aesthetic superiority”, (Dyer 70), has also manifested itself in certain aspects of Extreme Metal and in particular Black Metal. As highlighted earlier, just as 'whiteness' has been linked with notions of power, superiority and purity, so to have some Black Metal bands suggested that whiteness within Metal is inherently superior.

The adoption of corpse paint is just one way notions of 'whiteness' have been underlined in the Extreme Metal scene. Such ideas of whiteness in some cases developed into more pronounced aspects of Nationalism and in particular National Socialism. The development of extreme right-wing beliefs, coupled with other more established controversial subject matters, such as Satanism, led to a notoriety that some Black Metal was, in many ways, proud to live up to.

Whilst overtly racist or fascist sentiments are far from the norm within the Black Metal and wider Extreme Metal genre and the intolerance of such beliefs within the Metal industry in general has been clearly illustrated on many occasions, it cannot be said that those who are open and committed to extreme right-wing beliefs have not gained attention and some support through the controversial iconography and discourse they have used. A marked example of such attitudes can be found in the music, beliefs and actions of the Norwegian Black Metal band Burzum. Burzum, a solo project of musician Varg Vikernes, was one of the first Black Metal bands to appear in Norway. Although originally gaining inspiration from popular motifs in fantasy literature, Vikernes became increasingly known within the Black Metal scene for his increasingly radical views in regard to racial ideology and is now an outright self-confessed Neo-Nazi.

In recent years Vikernes has courted controversy and reinforced a racist and fascist discourse within the Black Metal scene. In 1997, Vikernes was heavily criticised by many within Extreme Metal over the design of a new Burzum t-shirt. Created by Vikernes himself, the front featured the usual Burzum logo but was also adorned with a German World War II SS Death's Head logo. This, combined with a back print which bore the slogan “Support your local Einsatzkommando”, led to problems licensing and printing the shirt. Whilst Tiziana Stupia, Director of the now defunct Suffolk-based Misanthropy Records to which Burzum was signed, highlighted that the term Einsatzkommando was “still used quite uncontroversially to describe police SWAT teams” (Terrorizer 1997:6, no.41), the unambiguous fascist motifs also present on the shirt betray the true intention of the slogan.

However, it would be erroneous to suggest that controlling images of 'colour' within the Nordic Black Metal scene are situated merely within a framework of neo-Nazi rhetoric. Indeed, such radical and consequently isolated ideologies and actions of certain Extreme Metal musicians that were very much apparent in the early 1990s have largely given way to more contemporary and in some ways egalitarian aesthetic, thematic and stylistic formations. The pastoral fixations of Black Metal that were very much analogous with right-wing dogmatic beliefs have been replaced by a distinctly 'urban' mindset that now focuses upon a 'commonality of adversity' and problems of modern existence for all peoples. Aesthetically the use of 'corpsepaint' has largely been dropped by many of the more pioneering acts, and this combined with stylistic movements that have seen the adoption of traditionally 'non-white' musical formations, has resulted in the drum 'n' bass/ ambient trip-hop concentrations of bands such as Arcturus and Ulver, and the general focus of 'urban decay' espoused by those such as Satyricon. Yet, even contemporary Black Metal has not completely severed its links with fascist controversy, and consequently constructs of colour, as even merely the names of acts such as Zyklon clearly illustrate.

It is clear then that certain oppressive texts in relation to constructs of 'colour' can be highly problematic for many, both within and outside the Extreme metal scene. Powerful and historical discourses that espouse 'natural' assumptions around notions of ethnicity produce crude yet largely unquestioned presentations. Consequently, through its incorporation of such texts, certain aspects of Black Metal can be seen to perpetuate oppressive ideas of 'difference'. Via certain controlling images, some individuals can be subjected to objectification within Extreme Metal subculture which sees them marginalised and relegated. Consequently, dominant discourses within some areas of Black Metal can have the result of portraying ethnic minorities as merely 'non-white' and thus inexorably link such groups with a notion of 'inferiority'.

CIT Citation reference for this article