“You are not a beautiful and unique snowflake”

Fighting and Ideology in Fight Club 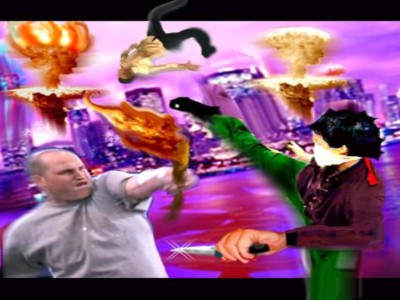 How much do you know about yourself if you’ve never been in a fight? (Fight Club)

…The fabric of the rhizome is the conjunction, “and…and…and…” This conjunction carries enough force to shake and uproot the verb “to be.” Where are you going? Where are you coming from…These are totally useless questions. (Gilles Deleuze and Felix Guattari 25)

Fight Club (1999) depicts the struggle of Jack (Edward Norton) to determine a sense of identity in late capitalism, under which discipline gives way to control (Deleuze 177-182), and consumer culture feminises men. Within this social structure, people no longer occupy singular subjectivities, but instead are compelled to slide between infinite subject positions, always in a state of becoming, never arriving. Jack’s sense of identity, gleaned from shiny, new possessions, is exemplary of the postmodern subject who is all malleable surface and no depth, or, to use Jean Baudrillard’s lexicon, a schizophrenic “pure screen, a switching center [sic] for all the networks of influence” (a 133). As an alternative to this hollow and meaningless subjectivity, Fight Club suggests that there is a connection between pain and aggression and ‘knowing yourself’. Confronting and engaging with the primal feelings of pain and oblivion, it is implied, will bring Jack closer to a more authentic sense of identity than he could ever buy for himself from Ikea.

Jack begins to attend support groups for the ill, in search of “real pain.” The crying and sense of oblivion experienced at these groups prove cathartic for Jack. These early scenes anticipate the idea that it is not through external things that one can attain an authentic sense of identity; rather, that the quest for authentic identity has become redundant and the only way out is to aspire to something less inauthentic. The way to do this, Fight Club suggests, is to embrace hopelessness, to return to degree zero and proceed in a simpler way.

Jack’s apartment and the objects it contains are metonymic for his personality: recall the scene depicting his condo complete with descriptive captions and mood music, as if it were an advertisement. This is a visual enactment of Baudrillard’s theorisation of hyperreality, defined as the kind of reality that has resulted from an ideology that no longer represents real conditions of existence, because there are no longer any real objective truths to represent (b 6, 25). By extension, Jack’s personality is a piecemeal construct of these superficial objects: “I loved that condo. I loved every stick of furniture. That was not just a bunch of stuff that got destroyed; it was me.”

After destroying Jack’s apartment, Tyler (Brad Pitt) confronts Jack with a critique of the consumer ideology by which he has lived his life. Confounding distrust of women and contempt for consumerism, Tyler points out that things “could be worse. A woman could cut off your penis while you’re asleep and toss it out of the window of a moving car,” before launching into an assault on Jack’s consumerist lifestyle asking why

Is a duvet essential to our survival in the hunter-gatherer sense of the word…We’re consumers, we are by-products of the life-style obsession. Murder, crime, poverty: these things don’t concern me: celebrity magazines, television with five hundred channels, some guy’s name on my underwear…I say, “never be complete.” I say, “stop being perfect.” I say, “let’s evolve.”

It is curious that Tyler carries out this tirade while consuming mass-produced beer and cigarettes. Fight Club overtly criticises ‘feminine’ modes of consumption—agonising over which ruffled valance to buy; taking pride in one’s home wares and condiments. However, this is undercut by its complicity with more ‘masculine’ modes of consumption—smoking and drinking - which are contingent on the rugged mode of masculinity it promotes. Fight Club does not only depict postmodern subjectivity in general as in crisis; rather, the suggestion is that in the postmodern era masculine subjectivity in particular is in trouble.

Jack’s struggle to recuperate a sense of authentic masculine identity involves two different types of conflict: physical and political. Through physical violence we see fighting enacted in its arguably rawest sense: hyperreal violence with no coherent objective. Political conflict in this film includes but is not limited to physical brutality, propaganda, and acts of terrorism. The two different types of struggle in this film conduct themselves under the auspices of ‘Fight Club’ and ‘Project Mayhem’, respectively. Superficially, it would appear that Fight Club and Project Mayhem are two different things: Fight Club is for the sole purpose of men engaging in physical violence and an ensuing sense of abandon, while Project Mayhem is a tightly regimented organisation devoted to resisting and attacking the capitalist system and consumer culture. While considering the two different types of conflict in isolation would make it easier to unpack the complex set of ideas which the narrative device of fighting acts as a vehicle for in this film, this would be to ignore the fact that according to Fight Club the struggle for authentic subjectivity under late capitalism is a dubious objective to begin with, that “maybe it’s a mistake to believe in the existence of things, persons, or subjects” (Deleuze 26).

Fight Club is represented as a way for Jack to subvert the ideology of late capitalism and its inherent consumerism that has, up to this point, defined his subjectivity. Fight Club potentially subverts the ideology of late capitalism in two ways: first, it provides a space where class hierarchy does not apply and allows lower-class workers to be momentarily “like gods” (this inversion proves, however, to be a hierarchical structure). Secondly, the evidence of physical violence can be read as subverting the ideology of respectable presentation in the bureaucratic work place. As Jack explains: “I got right in everyone’s hostile little face. Yes, these are bruises from fighting. Yes, I’m comfortable with that. I am enlightened.” Exactly what it is that is enlightening about fighting in this film is worth consideration. In the article ‘Fuck you Hero’ in Face magazine, Edward Norton describes the point of Fight Club as “needing the punch in the face to wake yourself up.” I think it’s about more than this. Notice that Jack continues to attend Fight Club long after he proclaims, “I am enlightened.” So, it’s safe to say it’s about more than simply ‘waking yourself up’.

Jack describes how fighting makes him feel saved from the emptiness of his life, that it is “not about words.” An understanding of the explicit bodily violence depicted in Fight Club can be enhanced when considered with reference to John Fiske’s ‘Offensive Bodies and Carnival Pleasures’ (1989). Developing Michel de Certeau’s thesis that “there is no law that is not inscribed on bodies” (139), Fiske asserts the primacy of the body in ideological struggles, arguing “the body is where the social is most convincingly represented as the individual and where politics can best disguise itself as human nature” (70). In actively damaging the external façade of their bodies, therefore, the members of Fight Club reject the conservative politics that inscribe themselves on the neatly presented bodies of obedient workers. Fiske also makes reference to the psychoanalytic concept ‘jouissance’ defined as “a moment of pleasure when the body breaks free from social control” (94). Given that Jack describes the experience of Fight Club as defying words, fighting could be read as an experience of jouissance which allows members to escape the dominant system of signification and that momentarily transports these men, if not closer to the ‘truth’, at least further from social constraints.

While Fight Club implicates other factors as being responsible for the contemporary demise of masculinity—including the breakdown of the family unit and absentee fathers—Tyler’s address to Fight Club foreshadowing Project Mayhem is perhaps the clearest articulation in Fight Club of the disaffection felt by these men and its alleged cause:

I see in Fight Club the strongest and smartest men who have ever lived—an entire generation pumping gas and waiting tables; or they’re slaves with white collars…Advertisements have them chasing cars and clothes, working jobs they hate so they can buy shit they don’t need. We are the middle children of history, with no purpose or place. We have no Great War, or great depression. The great war is a spiritual war. The great depression is our lives. We were raised by television to believe that we’d be millionaires and movie gods and rock stars—but we won’t. And we’re learning that fact. And we’re very, very pissed off.

Following this speech, Tyler hands out homework assignments. Tasks include the incitement of violence in the wider community, and the calculated vandalism of billboards, car-yards and public art. Tyler completes his own homework assignment, threatening a convenience store attendant with death unless he takes steps immediately to return to college and pursue his dream. This scene is exemplary of the ideology of ‘following your dream’, a perversion of the capitalist ethos, that pervades Fight Club. While threatening to drive the car they are both in into oncoming traffic, Tyler urges Jack to decide what it is he wants to accomplish before he dies. This appeal to individual fulfilment contradicts the hyper-collective mentality of Project Mayhem, which dictates that members renounce their names, shave their heads, wear identical black clothing and immerse themselves in dogma: “You are not special. You are not a beautiful and unique snowflake.” Tyler’s appeal to Jack to “stop trying to control everything and just let go” is dissonant with the tightly regimented structure of Project Mayhem, complete with teams and committees.

The notion of pain as a portal to ‘your true self’ is recalled when Tyler gives Jack a chemical burn. Tyler expounds:

Without pain…we’d have nothing…what you’re feeling is premature enlightenment. This is the greatest moment of your life…It’s only after you’ve lost everything that we’re free to do anything.

This ideology of abandon, of ‘losing it all,’ is contradicted throughout Fight Club by Tyler’s equal appeal to rules and structure. Furthermore, Jack’s description of the feelings he experienced after fighting—“when the fight was over, nothing was solved, but nothing mattered”—seems to be embracing the converse: if nothing was solved and nothing mattered, surely ‘finding yourself’ is not important. Slavoj Zizek’s consideration of the postmodern individual can stand as a summary of the depiction of subjectivity in Fight Club. Zizek posits a subjectivity that knows no limits, when

[t]he inherent obverse of ‘Be your true Self!’ is…the injunction to cultivate permanent refashioning, in accordance with the postmodern postulate of the subject’s indefinite plasticity…in short, extreme individualism reverts to its opposite, leading to the ultimate identity crisis: subjects experience themselves as radically unsure, with no ‘proper face’, changing from one imposed mask to another, since what is behind that mask is ultimately nothing, a horrifying void they are frantically trying to fill in with their compulsive activity… (373)

In this sense, the narrative on subjectivity in Fight Club becomes extremely complicated, conflating extreme individualism (“follow your dream”), extreme collectivism (“you are not special”), and an endless shifting from mask to mask to mask (Cornelius—Jack—Tyler…) where no mask is privileged as more authentic than another.

Fight Club is fundamentally ambivalent towards all of the issues it would explore. It promotes a discourse of ‘finding yourself’ while simultaneously insisting “you are not a beautiful and unique snowflake.” Does it all simply dissolve into postmodern irony, or does a kernel of significance remain? Beneath the contradictions the message regarding subjectivity seems to be this: the only ‘authentic’ thing about contemporary subjectivity is that at its heart lies a void. Embracing this void, while a bleak prospect, rather than frantically trying to compensate for its absence, is the only authentic gesture that remains.