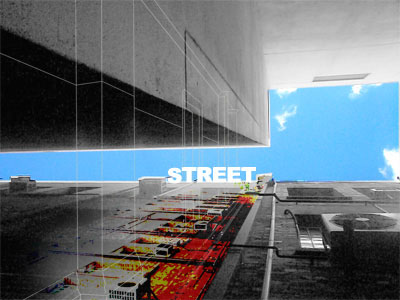 Find your black holes and white walls, know them … it is the only way you will be able to dismantle them and draw your lines of flight.—Deleuze and Guattari, A Thousand Plateaus

Defined by originator David Belle as “an art to help you pass any obstacle”, the practice of “parkour” or “free running” constitutes both a mode of movement and a new way of interacting with the urban environment. Parkour was created by Belle (partly in collaboration with his childhood friend Sébastien Foucan) in France in the late 1980s. As seen in the following short video “Rush Hour”, a trailer for BBC One featuring Belle, parkour practitioners (known as “traceurs”), leap, spring, and vault from objects in the urban milieu that are intended to limit movement (walls, curbs, railings, fences) or that unintentionally hamper passage (lampposts, street signs, benches) through the space.

“Rush Hour” was among the first media representations of parkour, and it had a significant role in introducing and popularizing the practice in Britain. Parkour has subsequently been widely disseminated via news reports, Nike and Toyota ads, the documentaries Jump London (2003) and Jump Britain (2005), and feature films, including Luc Besson’s Yamakasi – Les Samouraïs des Temps Modernes (2001) and Banlieu 13 (2004; just released in the U.S. as District B13), starring David Belle as Leto and Cyril Raffaelli as Damien. Sébastien Foucan will appear in the upcoming James Bond film Casino Royale as Mollaka, a terrorist who is chased (parkour-style) and then killed by Bond. (Foucan can also be seen in the film’s trailer, currently available at both SonyPictures.com and AOL.com; the film itself is scheduled for release in November 2006). Madonna’s current “Confessions” tour features an extended parkour sequence (accompanying the song “Jump”), albeit one limited to the confines of a scaffold erected over the stage. Perhaps most important in the rapid development of parkour into a world-wide youth movement, however, has been the proliferation of parkour websites featuring amateur videos, photos, tutorials, and blogs.

The word “parkour” is derived from the French “parcours” (as the sport is known in France): a line, course, circuit, road, way or route, and the verb “parcourir”: to travel through, to run over or through, to traverse. As a physical discipline, parkour might be said to have a “poetics” — first, in general, in the Aristotelian sense of constructing through its various techniques (tekhnē) the drama of each parkour event. Secondly, one can consider parkour following Aristotle’s model of four-cause analysis as regards its specific materials (the body and the city), form or “vocabulary” of movements (drawn primarily from gymnastics, the martial arts, and modern dance), genre (as against, say, gymnastics), and purpose, including its effects upon its audience and the traceurs themselves. The existing literature on parkour (at this point, mostly news reports or websites) tends to emphasize the elements of form or movement, such as parkour’s various climbs, leaps, vaults, and drops, and the question of genre, particularly the ongoing, heated disputes among traceurs as to what is or is not true parkour. By contrast, my argument in this essay will focus principally on the materials and purpose of parkour: on the nature of the city and the body as they relate to parkour, and on the ways in which parkour can be seen to “remap” urban space and to demonstrate a resistance to its disciplinary functions, particularly as manifest in the urban street “grid.”

The institution of the street “grid” (or variations upon it such as Haussmann’s Parisian star-configuration) facilitates both the intelligibility — in terms of both navigation and surveillance — and control of space in the city. It situates people in urban spaces in determinate ways and channels the flow of pedestrian and vehicular traffic. The “grid” thus carries a number of normalizing and disciplinary functions, creating in effect what the philosophers Gilles Deleuze and Félix Guattari refer to as a “striation” of urban space. This striation constitutes “a process of capture of flows of all kinds, populations, commodities or commerce, money or capital, etc.” within a field of determinate spatial coordinates (Deleuze and Guattari 386). It establishes “fixed paths in well-defined directions, which restrict speed, regulate circulation, relativize movement, and measure in detail the relative movements of subjects and objects” (Deleuze and Guattari 386). Many of these aspects of striation can be seen in the ways urban space is depicted in the “Rush Hour” video: in the gridlocked traffic, the flashing tail-lights, the “STOP” light and “WAIT” sign, the sign indicating the proper directional flow of traffic, and the grim, bundled-up pedestrians trudging home en masse along the congested streets.

Against these images of conformity, regulation, and confinement, the video presents the parkour ethos of originality, “reach,” escape, and freedom. Belle’s (shirtless) aerial traversal of the urban space between his office and his flat — a swift, improvisational flow across the open rooftops (and the voids between them), off walls, and finally down the sloping roof into his apartment window — cuts across the striated space of the streets below and positions him, for that time, beyond the constrictions of the social realm and its “concrete” manifestations. Though parkour necessarily involves obstacles that must be “overcome,” the goal of parkour is to do this as smoothly and efficiently as possible, or, in the language of its practitioners, for the movement to be “fluid like water.” The experience of parkour might, then, be said to transform the urban landscape into “smooth space,” in Deleuze and Guattari’s sense of “a field without conduits or channels” (371), and thus into a space of uninhibited movement, at least in certain ideal moments.

Parkour seems to trace a path of desire (even if the desire is simply to avoid the crowds and get home in time to watch BBC One) that moves along a Deleuzean “line of flight,” a potential avenue of escape from the forces of striation and repression. Here the body is propelled over or through (most parkour movement actually takes place at ground level) the strata of urban space, perhaps with the hope that, as Deleuze and Guattari suggest, “one will bolster oneself directly on a line of flight enabling one to blow apart strata, cut roots, and make new connections” (15). In the process, parkour becomes “an art of displacement,” appropriating urban space in ways that temporarily disrupt their controlling logics and even imply the possibility of a smooth space of desire.

One might see parkour as an overcoming of social space (and its various constrictions and inhibitions of desire, its “stop” and “wait” signs) through the interplay of body and material barriers. The body becomes an instrument of freedom. This, again, is graphically conveyed in “Rush Hour” through the opening scene in which Belle strips off his business suit and through the subsequent repeated contrasts of his limber, revealed body to the rigid, swathed figures of the pedestrians below. In part an effect of the various camera angles from which it is shot, there is also an element of the “heroic” in this depiction of the body. This aspect of the representation appears to be knowingly acknowledged in the video’s opening sequence. The first frame is a close-up, tightly focused on a model of a ninja-like figure with a Japanese sword who first appears to be contemplating a building (with an out-of-focus Belle in the background contemplating it from the opposite direction), but then, in the next, full shot, is revealed to be scaling it — in the manner of superheroes and King Kong. The model remains in the frame as Belle undresses (inevitably evoking images of Clark Kent stripping down to his Superman costume) and, in the final shot of that sequence, the figure mirrors Belle’s as he climbs through the window and ascends the building wall outside. In the next sequence, Belle executes a breath-taking handstand on a guard railing on the edge of the roof with the panorama of the city behind him, his upper body spanning the space from the street to the edge of the city skyline, his lower body set against the darkening sky.

Through the practice of parkour, the relation between body and space is made dynamic, two reality principles in concert, interacting amid a suspension of the social strata. One might even say that the urban space is re-embodied — its rigid strata effectively “liquified.” In Jump London, the traceur Jerome Ben Aoues speaks of a Zen-like “harmony between you and the obstacle,” an idealization of what is sometimes described as a state of “flow,” a seemingly effortless immersion in an activity with a concomitant loss of self-consciousness. It suggests a different way of knowing the city, a knowledge of experience as opposed to abstract knowledge: parkour is, Jaclyn Law argues, “about curiosity and seeing possibilities — looking at a lamppost or bus shelter as an extension of the sidewalk” (np.). “You just have to look,” Sébastien Foucan insists in Jump London, “you just have to think like children….” Parkour effectively remaps urban space, creating a parallel, “ludic” city, a city of movement and free play within and against the city of obstacles and inhibitions. It reminds us that, in the words of the philosopher of urban space Henri Lefebvre, “the space of play has coexisted and still coexists with spaces of exchange and circulation, political space and cultural space” (172). Parkour tells us that in order to enter this space of play, we only need to make the leap.